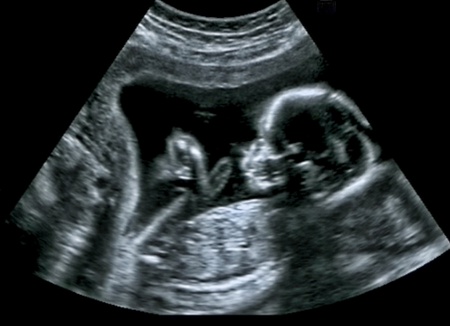 New research led by the University of Aberdeen has shown that poverty is already affecting the growth of unborn babies from as early as mid-way through pregnancy.

...regardless of whether you live in Saudi, the US or Europe, and accounting for things that might affect fetal growth, if your parents are poor you will be smaller before birth and at birth compared to if your parents were not poor." Professor Steve Turner

This is the first time that size differences have been found at such an early stage of development, and also the first time it has been compared across continents.

The multi-national study gathered details of ante-natal and birth size and related it to household income.  The results showed that across the countries studied, babies were smaller at birth if they came from a lower income household and this discrepant size was already apparent at 20 weeks gestation.

The negative health outcomes associated with smaller size before and at birth are already known; these include high blood pressure, type 2 diabetes, heart attacks, asthma, ADHD and early death.

This study which is published in the Journal of Epidemiology and Community Health, related poverty to birth and pre-natal size while accounting for other factors including mother’s age, height, number of other children and smoking.

In collaboration with colleagues around the world, the researchers analysed data from around 22 thousand individuals from nations including Scotland, England, Saudi Arabia, USA, Netherlands, Spain, Norway, Sweden and France.

Professor Steve Turner who led the study explains: “There is a well-recognised health inequality where quality and duration of life are lower among the most poor.  This divide is present both within and between countries.

“What this study shows is that the inequality, as seen by reduced size in fetal life, is present long before birth and this poverty gap widens between twenty weeks gestation and birth.

“Basically, regardless of whether you live in Saudi, the US or Europe, and accounting for things that might affect fetal growth, if your parents are poor you will be smaller before birth and at birth compared to if your parents were not poor.  This is problematic as small size before and after birth puts an individual at increased risk for many serious illnesses in later life.”

The authors hope that this study will encourage healthcare providers to recognise the health risks associated with lower income for mothers and their unborn children, and to provide more support and guidance to mitigate the risks.

Professor Turner adds: “We suggest that the mechanisms that drive this inequity may be explained by pregnant mothers from poor households having difficulty in accessing or engaging with antenatal care.

“We would like to see healthcare providers around the world strive to increase engagement with pregnant mothers living in poverty.  This engagement will reward all of society by putting unborn children on a trajectory to a longer and healthier lives.”