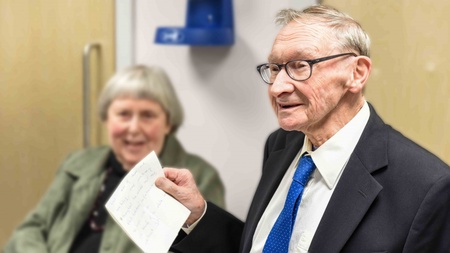 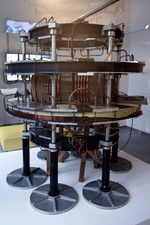 The University of Aberdeen academic who invented the world's first full body MRI scanner has passed away at the age of 77, it has been announced.

Along with a dedicated team, Professor James Hutchison, known as Jim, built the ‘Mark 1’ machine which successfully scanned its first patient on August 28, 1980.

He helped patent a ‘game-changing’ technique, known as spin-warp imaging, which was adopted throughout the world and is still used today in hundreds of thousands of MRI machines globally.

The technology behind MRI was developed in the 1970s by a small number of teams worldwide, including those at Aberdeen and Nottingham Universities in the UK. But it was Professor Hutchison who built the first full-body scanner, along with a team that included Dr William (Bill) Edelstein, and developed spin-warp which changed the face of MRI research ‘overnight’.

Professor David Lurie, who joined Prof Hutchison’s team as a young researcher at Aberdeen after completing his PhD, said many in the scientific community had dismissed MRI as a non-viable technology prior to the spin-warp breakthrough.

He said: “In the late 70s, the Mark 1 machine was built and it was producing images but they were still very ‘blobby’ and certainly not of diagnostic quality. This was the same with other groups around the world, in Nottingham and the US.

“But in 1980, Jim co-invented spin-warp technique with Bill Edelstein, and the difference was night and day – it dramatically improved the images overnight and they immediately became of diagnostic quality. Spin-warp is still used by every single MRI scanner in the world today and we have Jim and Bill to thank for that.”

Professor Tom Redpath, a PhD student under Professor Hutchison at the time of the breakthrough, added: “I think the team were all a bit gobsmacked to be honest. They’d been getting comments from various researchers around the world along the lines of, ‘I don’t know why you’re bothering to do this…it’ll never work’.

“Previously it had been taking other teams hours to get a poor quality image of a wrist or other small body part, so when we developed spin-warp and we got really good images of any part of the body in around two minutes…the whole thing took off like a rocket. We thought, ‘Wow! This actually works!’ It was huge fun. It was an energetic and energising place to be.”

Without doubt he was the most capable scientist I ever met." Professor David Lurie

Professor Hutchison attended Blairgowrie High School before completing a PhD at the University of St Andrews. Having developed an expertise in Magnetic Resonance, he was appointed to the University of Aberdeen’s Medical Physics team in the 1960s by Professor John Mallard.

Professor Lurie, who currently heads up a European-wide project developing the next generation of MRI technology, said it was clear from the first moment he met Professor Hutchison that he was a ‘brilliant scientist’.

“Without doubt he was the most capable scientist I ever met. He knew about everything. Not just about MRI, he had an incredibly broad knowledge of science and engineering.

“We in the group would occasionally come up with ideas and when we took them to Jim he’d sometimes say ‘oh yes, I thought about that a few years ago’. He’d look it up in his lab books and sure enough he’d find something similar from five years earlier.

“Nevertheless, when group members did come up with a new idea, Jim was incredibly supportive and would help us bring it to fruition by drawing on his encyclopaedic knowledge. He was also an excellent teacher and would spend hours explaining theories and concepts to students.

“Jim was also so incredibly modest. He never wanted to take personal credit for anything.  It wasn’t important to him to get prizes and recognition, people saying how brilliant he was – he just wanted to produce good science. He was, of course, awarded numerous prestigious prizes and awards but he didn’t particularly like the public attention.“

Professor Steve Heys, head of the University of Aberdeen’s School of Medicine, Medical Sciences and Nutrition, said: “Professor Hutchison will be remembered as a true pioneer of MRI technology. Along with the team around him, they were a group that have changed the face of medical imaging – an impact still felt today with the use of their techniques in modern MRI machines.

“Our thoughts are with his wife Meg, who herself was an accomplished MRI scientist at Aberdeen, at this sad time.”

Professor Hutchison’s funeral will be held on Friday 14th September at 11.30am in Trinity Church, Westhill.