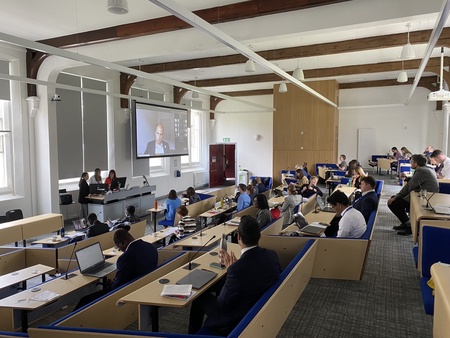 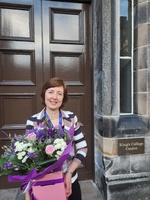 On 22nd and 23rd June 2022, the Scottish International Law conference International Law and Technological Progress took place at the University of Aberdeen King’s College Centre. The event was organised by Professor Irène Couzigou, with support and contributions from Dr Edouard Fromageau, Dr Daria Shapovalova, and Nikki Pearce and her team from the University of Aberdeen’s CPD Services. This hybrid event was attended on campus by more than 50 participants from the UK and continental Europe, as well as over 70 virtual participants from across the globe. The speakers largely travelled to Aberdeen to present in-person and were assisted by several law students who monitored the online chat and Q&A. The conference was funded by the Society of Legal Scholars and the British and Irish Law Education and Technology Association and was supported by the European Society of International Law. The School of Law Research Committee, the Aberdeen Centre for Constitutional and Public International Law, the Centre for Commercial Law, and the Aberdeen Centre for Energy Law also contributed funds for the event.

Delegates explored the impact of new technologies on general international law, for example how sovereignty may be different in cyberspace than in the physical world. Discussions also covered several international legal frameworks such as:

The conference also touched upon intellectual property law, communication law, and computing science.  Most of the presentations will be published by Professor Irène Couzigou and Dr Edouard Fromageau with Elgar International Law and Technology Series.

The rich and exciting conference programme was complemented by a drink reception accompanied by a bagpiper, a traditional Scottish dinner (with, of course, haggis!) in the beautiful Elphinstone Hall, a fascinating guided tour of campus conducted by Senior Lecturer Scott Styles, and marvellous Scottish weather!