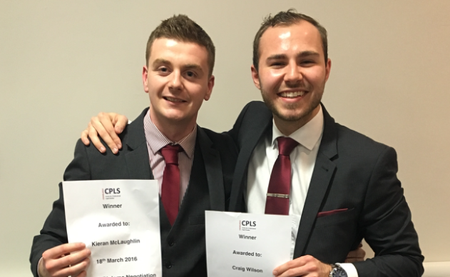 The University of Aberdeen has once again come out on top in a national competition that sees the best of Scotland's student legal talent pit their wits against each other.

Law students Craig Wilson and Kieran McLaughlin battled it out against teams from Glasgow, Edinburgh, and Strathclyde Universities to win the National Negotiation Competition, which was held recently in Edinburgh.

It is the second year running that the University’s Law School has won the competition, and a team from this year’s Diploma class will now go on to represent Scotland at the International Negotiation Competition, to be held in Switzerland in July.

Reflecting on their experience at the competition, Kieran said: “We were both conscious of the fact that we would be competing against our respective undergraduate institutions and we were returning to Edinburgh which Craig considers to be his ‘home turf’, so there was an added incentive to do well there and prove ourselves against tough opposition.

“We both knew that we were well prepared and above all else we were well trained.  I wouldn’t say that we expected to win but I think that we both knew we stood as good a chance as anybody else. When we came out of the final negotiation, we both felt quietly confident and thankfully the judges agreed that we deserved to win.”

Craig added: “Naturally, we were delighted to have won the Scottish competition and thrilled to have come out on top against such strong opposition.

“On a personal level we were particularly pleased that our hard work in the build-up to the competition had paid off.  Also, we were immediately grateful towards our team for all the assistance and support that we had received in the preparing us for the big event.

“All in all we both thoroughly enjoyed the day in Edinburgh.  We met a lot of good people and made a few friends, which in addition to winning the competition made the whole experience really memorable.”

Craig and Kieran are both studying for a Diploma in Professional Legal Practice having completed their undergraduate degrees at Edinburgh and Glasgow Caledonian Universities respectively.

Explaining the reasons behind his decision to study at Aberdeen, Craig said: “The Diploma at Aberdeen has always been held in high regard as a programme which sets out to provide a hands-on experience which puts students in good stead for the future as trainee solicitors.

“There are no exams at the end of term.  Instead, summative assessments take place each week which retains your interest in seminars and creates a steady flow of continuous work throughout the year, rather than a spike at the end of term.”