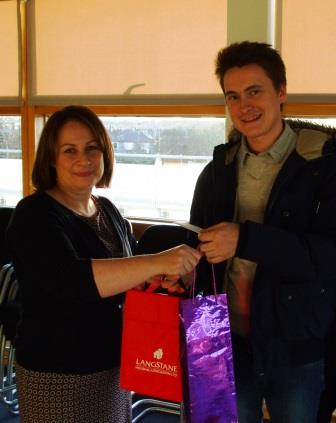 Judith Sutherland, Langstane Housing Association's Director of Housing and Social Justice, presents 4th year LLB student Sam Read-Norrie, with a prize in recognition of his A1 summative Scottish Law of Leases essay.  The essay was on the development of housing law and policy from 1980 onward with particular reference to the Housing Association sector in Scotland.

Course co-ordinator Dr Douglas Bain sent the six highest-marked 2015 essays to Judith so that she could see the fruits of the visit, and Judith was so impressed with the quality of the essays overall that she decided that some sort of prize was warranted.