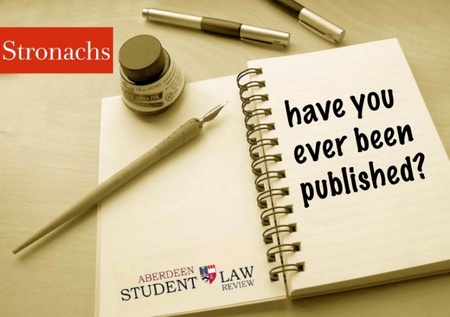 The idea to establish a student law review at the University of Aberdeen was first discussed by two students on a cold winter’s night in January 2010. The scene of this discussion was a place most suited to intellectual debate: a Public House on Union Street. The following day, this half-formed idea was proposed to the Head of the Law School, Professor Margaret Ross, who gave them permission to try and make something of it. Over a period of seven months the Founding Managing Editor, Dominic Scullion, and the initial Editorial Board endeavoured to ensure the project was completed. In July 2010 the inaugural issue was launched.

This year the Aberdeen Student Law Review (ASLR) is celebrating 5 years of existence. It seems not that long ago that the ASLR was a student project but it has grown into so much more since then. The ASLR is a well-respected student publication which is featured in HeinOnline as well as the Westlaw Legal Journal Index. The editorial board receives hundreds of submissions every academic year and the articles published in the ASLR are used by academics around the globe in shaping young legal minds.

The ASLR is founded on the belief that writing about the law is as important as reading about it or discussing it. It encourages law students to research more extensively and thus to broaden their legal minds. It encourages young lawyers to think about the other side to an argument and to pursue their own case armed with increased knowledge. It is what lawyers from this university have been doing since 1495 and it is what we hope the next generation of lawyers will continue to do.

The editorial board extends their gratitude to the staff of Aberdeen Law School for their continuing assistance in making this publication possible. We are also indebted to our peer reviewers, who must remain anonymous, and our sponsor, Stronachs LLP, for making the publication of this review possible since 2010. To celebrate the 5-year anniversary of the ASLR our sponsors have kindly agreed to establish the Stronachs Student Excellence Award; to be awarded to the author of the article that has the greatest impact on legal practise. The winner of the award will receive a 2 week work placement at Stronachs' Aberdeen office.

If you would like to learn more about the ASLR or make a submission (yes alumni can!) click!