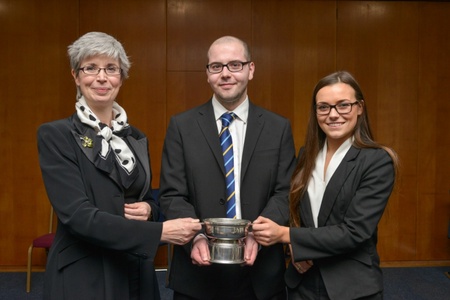 The School of Law at the University of Aberdeen was delighted to host this year’s Scottish Client Consultation Competition Final on 11 February.

The competitors were marked in accordance with recognised criteria set by the Brown Mosten International Client Consultation Competition. The external judges (Keith Napier, Linda Paterson, Elizabeth Merson, Liz Campbell, Nicola Youngson and David Morrison) selected the team of Shaun Alexander and Kirsty Hannigan as winners from the University of Strathclyde (pictured below with the judges). They will represent Scotland at the Brown Mosten International Client Consultation Competition in Lincoln, Nebraska in April.

Malcolm Combe, the lecturer who co-ordinated the Scottish final, said: “Congratulations to Shaun and Kirsty, who came out on top of a very talented field. The judges were very complimentary of all the teams, which bodes well for the profession in Scotland. I would like to record my thanks to all the judges for giving up their time, and also to Mike Graham (the Scottish representative of the competition) for his guidance, my colleagues Jackie Ewen and Susan Stokeld for their support on the day, our two clients Robin Bortner and Lawrence Butler-Perks, and of course to all the students who participated.”

The winners are pictured below with Anne-Michelle Slater, Head of the School of Law, being presented with the Elaine Tyre Memorial Quaich.