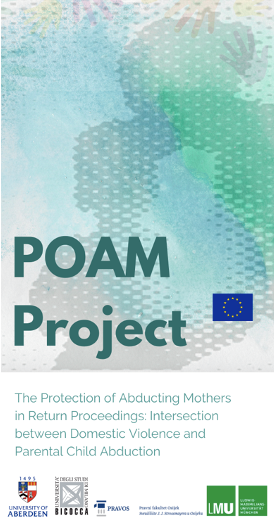 On 26 March 2021, the POAM project held its final conference, an international event with over 140 registered academics, legal experts, judges and other professional stakeholders from around the world.

The POAM project is concerned with the protection of mothers who have removed or retained their children abroad against the background of domestic violence in Hague return proceedings. POAM is a project led by the University of Aberdeen (Dr Katarina Trimmings), with a core consortium consisting of Universities from three partner EU Member States – Germany (Professor Anatol Dutta), Croatia (Professor Mirela Zupan) and Italy (Professor Costanza Honorati). Additionally, the project involves National Contact Points in Spain, Slovenia and Serbia. The project is funded by the European Union, within the scope of the European Commission Rights, Equality and Citizenship Programme 2014-2020 under grant agreement No 810373.

Although intended as an event hosted in Munich, Germany, the POAM conference was efficiently organised and delivered as an online event by the project team at the Ludwig Maximillian University of Munich. The conference programme can be found here, the event focused on presenting the results of the project which are reflected in the Best Practice Guide.

While this was the POAM project’s final conference, the long-term utility and benefits of the project results can be seen on the project website, in particular the Best Practice Guide which is aimed at ensuring that relevant professionals are trained in confronting issues around the protection of abducting mothers in child abductions committed against the background of domestic violence of the. An Executive Summary of the Guide is also available, as are further updates on the continuing work of POAM project on the website, including a parent survey. Further, a project book will be published, bringing together the findings of POAM, addressing the Regulation 606/2013 and Directive 2011/99/EU in the specific context of international parental child abduction but also more generally on recognition and enforcement of civil protection orders.