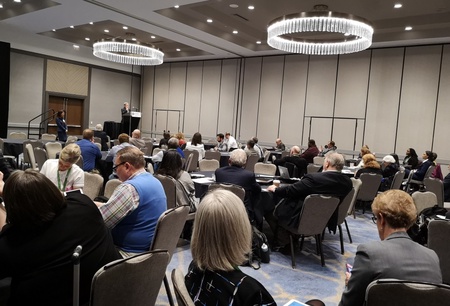 Professor Margaret Ross recently participated in the American Bar Association Dispute Resolution Conference in Minneapolis and shares some comments from day one of the Conference.

The plenary on “Dispute resolution in the Court – delivery of Justice in the self-service society” was a fabulous start and made it well worth coming to Minneapolis in the face of an incoming snow storm.  Michael Buenger, Executive Vice President of the National Center for State Courts, challenged us to ask whether our courts are fit for the way people interact in the current century, particularly using AI extensively and describing many court procedures as “calcified.” If designing from scratch would we start here?  We heard about court annexed mediation processes in five different states including two that have benefitted from independent evaluation through the Harvard Negotiation and Mediation clinical programme. That evaluation led to much simplified modes of communication with parties and better understanding of what matters to them. How much? How long? What’s involved? Need to be explained very clearly. Not surprising and why not?

The USA national standards for court connected mediation programmes (written by a highly influential group of lawyers and DR pioneers in 1992) were examined critically and their principles endorsed. But, inequality of access exists because of different attitudes in courts, even within states.  Sharing resources and expertise is vital, not for achieving standardisation, but to make best use of experience and scarce and diminishing financial resource. So important to offer as much choice as possible to disputants while ensuring quality of process and justice.

There was a very warm welcome from the chief judge of the Minneapolis court in the Court building overlooking City Hall in a snow storm. For more than 10 years they have worked with the local lawyers to ensure that clients who try to represent themselves have the opportunity of lawyer support in a settlement discussion process if they want to use it.

Overall, there is much to think about for moving things forward in Scotland.