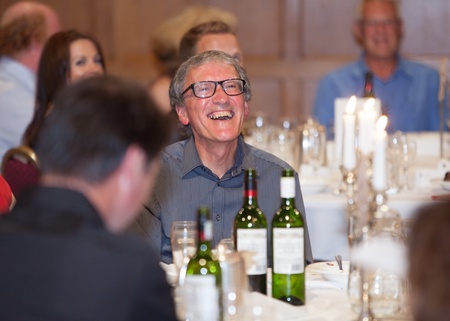 It is with great sadness that we announce the death of Professor David Lessels, as reported in The Scotsman today. Prior to his retirement in 2013, David spent 40 years as a Lecturer and Senior Lecturer within the Law School. Upon retirement, he was appointed an Honorary Professor, a tribute which was as popular as it was richly deserved. In retirement, he moved to East Lothian to be closer to his family, but remained a regular and welcome visitor who rarely missed a Graduation and enlivened many a meeting of alumni.

David was a skilled academic administrator to whom difficult and mission-critical tasks such as admissions and professional accreditation could be given with complete confidence. A fluent French speaker, he established many of the law School’s Erasmus links on Continental Europe, and was willing to put in the hard yards of repeatedly visiting our partner institutions to ensure that the exchange was working satisfactorily. “It’s a dirty job”, he would say, his eye twinkling, “but someone has to do it.” However, it was as an inspirational teacher and mentor to countless students and staff that he will be chiefly remembered.

Few people have been piped out of their final lecture to a guard of honour made up of their appreciative colleagues but then very few people exercised dominion over the lecture theatre in the way that David did. He was, quite simply, a master of the lecture. His delivery was dramatic, but this was no case of style over substance: his gestures and mannerisms were perfectly calibrated to accentuate key points and draw the students in to his material. Few can have ever made a lecture on the intricacies of the law of financial provision upon divorce such a joy. Generations of students were introduced to the workings of the Scottish legal system via his masterly tutorial on the case of Williams v Hemphill and his legendary catchphrase “the Court of Session is found in Edinburgh, from where it never moves. IT NEVER MOVES!” This motto – which startled and enthralled thousands of students over the years – will look like nothing much on the page. It owed a great deal to the manner of delivery, which was often impersonated but never bettered.

David was an extraordinarily popular member of staff, and wherever one went representing the University, David was one of the first people that alumni would ask after. The easy way to gain popularity with students is to relax expectations and standards. David did not do it like that. He expected his students to be prepared and on time and woe betide the hapless fresher who disappointed him in that regard. But David did not ask his students to do something he would not do himself. Right to the end of his career, his preparations were meticulous. Before every semester he did a tour of all his teaching rooms to ensure that he would not be thrown by any updates to the AV system and that it had the seating capacity advertised on the online room booking service. And although he was always generous with his time, meetings would be politely but firmly brought to an end 20 minutes before the start of a lecture so he could re-familiarise himself with the day’s material. He never busked it.

More than anything else, however, David was genuinely interested in his students. Due to his long-standing role as the Law School’s Admissions officer, his interest began before a prospective student had commenced their studies and extended long after they had graduated. No-one was just a face in the crowd to him; everyone was an individual and worthy of being treated as such. He had an almost uncanny ability to remember faces and names. He could meet a student years after they had left the University and know exactly who they were, who their friends were, and what their interests had been. He loved to hear how his students were getting on and revelled in their successes.

Retirement brought more time with his growing family, to whom he was devoted, and also the time to further indulge his other passions of golf, gardening, travel and music.

David will be remembered as a consummate professional in all that he did and as kind, sociable and collegiate a person as one could wish to meet. He will be very sorely missed by all who knew him.