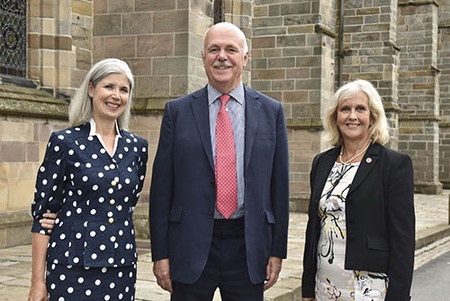 One of Scotland's most senior judges has visited the University of Aberdeen to deliver a lecture in memory of former UK Supreme Court Justice Lord Rodger.

Lord Pentland, Senator of the College of Justice and Chairman of the Scottish Law Commission, delivered the Lord Rodger Lecture on Friday (July 20), to students participating in the University’s Baltimore/Maryland Summer School in Comparative Law.

The Summer School has been hosted by the University for the past 33 years, and Lord Rodger – who died in 2011 – would make an annual trip to Aberdeen to lecture to students from the universities of Baltimore and Maryland who take part in the programme.

His close connection to the University’s School of Law led to the establishment of a lecture series to honour his memory, with UK Supreme Court Justice Lord Reed delivering the inaugural Lord Rodger Lecture in 2016.

The title of Friday’s lecture - ‘A wicked murder mystery: Lord Rodger and the mens rea of murder’ - saw Lord Pentland explore the Scottish Law Commission’s recent re-examination of the mental element in the offence of homicide Scottish Law, undertaken as part of the Commission’s tenth law reform programme.

This year’s event also saw the launch a book in memory of the late Professor David Carey Miller, who for many years was the Director of the Summer School and in whose memory the Law School have created a scholarship.

“We were delighted to welcome Lord Pentland to deliver this year’s Lord Rodger Lecture and to remember the close and strong association between the late Lord Rodger and Aberdeen Law School.”

Fellow Co-Director Dr Susan Stokeld added: “The lecture has provided a great opportunity for our Summer School students visiting from Baltimore and Maryland Law Schools to gain valuable insight into Scottish Law and to meet members of the local legal profession and Scottish judiciary.”