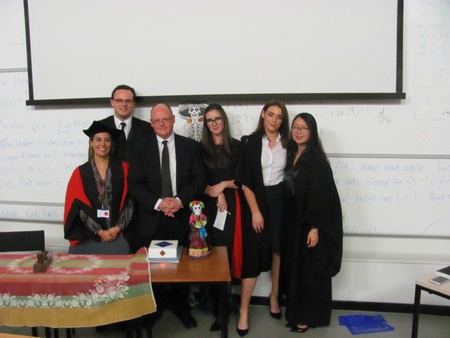 Those attending last Tuesday’s Staff v Student moot, an annual event that has become a Law School institution, were treated to a full-blown zombie invasion of KCG7, a demonstration of the rhetorical skills of the new Head of Law School (and moot judge) Dr Greg Gordon in repelling that invasion through pure force of red-faced veins-popping shouty shouty rage, the DJ-ing talents of Mooting Society President Oliver Chapman, the MC-ing skills of Dr Robert Taylor, and the usual cut-and-thrust of low blows and gratuitous insults between the students (Elizabeth and Justine) and staff (Daria and Gloria). Student counsel gamely attempted to persuade Lord Gordon as to the distinction in Scots Law between ‘Dead’ and ‘Dead dead’, hinting even at the possibility in law of a third a fortiori and presumably definitive category of ‘Dead dead dead’. Staff counsel argued that pretty much everyone in the Law School, staff and students, probably technically qualified as dead if lack of brain activity was taken as the yardstick for death. Unusually, it was not until 43 minutes into the moot that the first cheap shot at RGU students was delivered, but it was worth the wait. In an unprecedented judgment, Lord Gordon decided that the result of the moot was an ‘honourable draw’ with the staff and students taking a point each, but this was perhaps to be expected as inflation has eroded the value of the traditional students’ £10 bribe to the judge - Lord Gordon made it clear that £50 was now the absolute minimum starting price for buying a win in the SSM (so Mooting Society had best start saving up for next year). An honourable mention goes to the zombie invaders, one of whom came down with dermatitis from the rotting corpse make-up (Clineek Cadavera range from Boots) – he’s the glum-looking guy with the exceptionally lumpy raw red face you saw on Wednesday morning.