Launch of Continuity, Change and Pragmatism in the Law: Essays in Memory of Professor Angelo Forte
08 February 2017 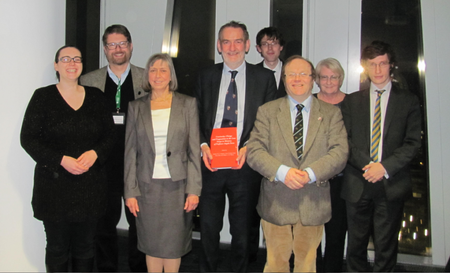 A celebration to mark the launch of Continuity, Change and Pragmatism in the Law: Essays in Memory of Professor Angelo Forte was held on 20 January 2017. The launch was held in the Craig Suite of The Sir Duncan Rice Library at Aberdeen University, and was generously supported by the School of Law Research Committee and by the Research Institute for Irish and Scottish Studies.

Published by the recently re-launched Aberdeen University Press, the book pays tribute to the highly important contribution to legal scholarship made by the late Professor Angelo Forte (1949-2012). In a wide-ranging series of articles, his former colleagues, friends and students write on the eclectic research themes he pursued, ranging from medieval Scots law to modern debates in insurance law.

Proceedings at the launch were opened by the Principal of Aberdeen University, Professor Sir Ian Diamond. He praised the book for its serious efforts to advance scholarship, and its avoidance of hagiography – a temptation into which editors and contributors of memorial volumes can easily fall. Tributes were also paid to Angelo as a colleague, friend and scholar by Professor Margaret Ross, Vice-Principal for People Strategy at Aberdeen, and Professor Jørn Øyrehagen Sunde, of Bergen Law Faculty. Professor Sunde leads the Research Group for Legal Culture at Bergen, which kindly gave a subvention towards the costs of publishing the volume. Without this it would not have been possible to proceed to print. Finally, Angelo’s widow, Dr Pía Coira, said a few words of thanks on Angelo’s behalf to all those involved in the project.

It is hoped that the volume will make a fitting tribute to a great gentleman, scholar and friend.

The book is available for purchase here.