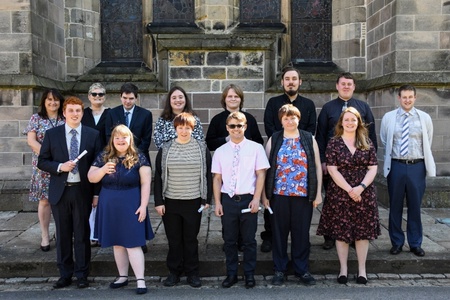 The sixth cohort of interns taking part in Project SEARCH, a collaborative project between the University, North East Scotland College and Inspire PTL, celebrated their achievements with a special ceremony.

The one-year programme sees up to 12 Project SEARCH interns, who are all registered students with North East Scotland College, spending a couple of weeks in a classroom environment before embarking on a rotation of three work placements in various roles and departments within the University.

The Aberdeen partners were initially selected to carry out the project in Session 2013/14 by the Scottish Commission for Learning Disability (SCLD) which oversees the initiative in Scotland.  The programme is supported by Skills Development Scotland and also by Aberdeen City Council and Aberdeenshire Council, who have funded some of the programme’s resources.

Professor George Boyne, Principal and Vice Chancellor hosted the ceremony and said: "I am personally very proud that the University is involved in this initiative and would like to take this opportunity to thank everyone on the Project SEARCH University of Aberdeen team and to congratulate them on the tremendous achievements they have made.  The engagement of staff across the University with the Interns and, in turn, their commitment and dedication to the roles they have undertaken is amazing."

Professor George Boyne was delighted to invite Simon Cranfield, a Project SEARCH Graduate from 2018 who now works at the University, onto the stage to help hand out the certificates to this year’s graduates.

The ceremony also recognised the invaluable contributions made by supervisors across a wide range of University departments and those in external organisations who had welcomed and supported the Interns during their placements over the past year.

In closing the ceremony, Arri Katsaitis delivered a heartfelt vote of thanks to all members of the team on behalf of the graduating interns.