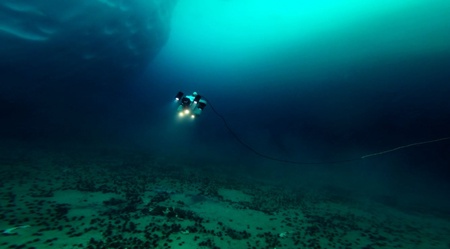 Scientists have discovered a type of seaweed at new depths for the first time around Antarctica.

Working at Rothera Research Station on Adelaide Island off the southwestern Antarctic Peninsula and by using a remotely operated vehicle (ROV) from a small boat the researchers found the red alga Palmaria decipiens at 100m below the surface and collected samples for further examination.

DNA sequencing was then used to confirm the type of seaweed.

Seaweeds are hugely important to marine ecosystems, providing a habitat to a variety of marine organisms like barnacles, snails, sea urchins, crabs and mussels as well as being natural carbon sinks.

Professor Frithjof Kuepper of the School of Biological Sciences at the University of Aberdeen said: “We know that carbon capture will be crucial to limiting global warming as we move forward and seaweeds sequester large amounts of CO2.

“Seaweeds have the potential to play a huge role in protecting the environment by storing carbon at the bottom of oceans when they die and reducing ocean acidification. Seaweeds are also an important food source to numerous animals and fish and have been eaten by people in many coastal communities in parts of the world for centuries.

Finding Palmaria decipiens at 100m depth is important for furthering our knowledge of Antarctica, a continent that is so important to understand for addressing the environmental challenges the world faces today." Professor Frithjof Kuepper of the School of Biological Sciences at the University of Aberdeen

“Seaweeds have been used in a variety of cosmetic and pharmaceutical goods and with carbon-neutralising properties it represents a sustainable product.

“Finding Palmaria decipiens at 100m depth is important for furthering our knowledge of Antarctica, a continent that is so important to understand for addressing the environmental challenges the world faces today.

“Our research aimed to clarify the maximum depths that seaweeds grow at in Antarctica and we used the ROV to look for seaweeds attached to hard substrate, in order to avoid mistaking them for alga which could have drifted down from shallower waters.

“We now know that seaweeds can live at least down to 100m depth in Antarctica. That is quite a lot, but we can’t rule out that they may live even deeper.”

Ben Robinson, British Antarctic Survey and University of Southampton added: “In Antarctica icebergs scour and remove seaweed from the shallows, leading to lots of loose seaweed at depths where it is no longer attached to the seafloor. Due to cold temperatures, it can take many years for these loose seaweeds to even start breaking down, so we could not rely on appearance. Instead we needed to use an ROV to test and collect seaweed to confirm whether they were attached to the seafloor and to confirm a new depth limit for seaweed.”

A fuller feature including pictures from the research carried out in Antarctica can be viewed here.