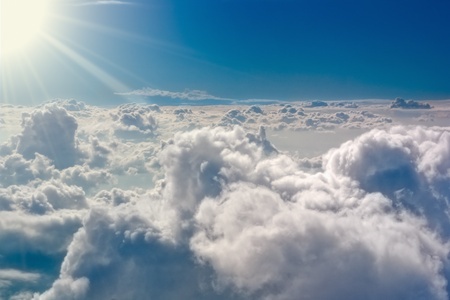 The discovery of an atmospheric time capsule has allowed scientists to directly measure the air that was breathed by Earth's first animals.

A team of international researchers, including geologists from the University of Aberdeen, made the discovery while analysing samples of halite – more commonly known as rock salt - dated 815 million years old.

The halite was found to contain traces of trapped atmospheric gas, from which measurements of oxygen were taken.

The analysis - which has been published in the Geology journal - found that the percentage of oxygen present in the atmosphere 815 million years ago was enough for animals to flourish.  Some studies have suggested that the required level of oxygen would only have been present much later in the Earth’s history.

Professor John Parnell, from the University of Aberdeen’s School of Geosciences, took part in the study which involved a team of international researchers led by Dr Nigel Blamey from New Mexico Tech.

Professor Parnell said: “With this study, the oxygen in the air that allowed the earliest animals to breathe has been measured directly for the first time.

What is especially significant in this study is that we actually discovered a real atmosphere sample, where previous estimates have been made using indirect modelling methods" Professor John Parnell

“We crushed samples of halite that were preserved in a drill core in Australia and removed the gases trapped in the salt crystals, which allowed us to measure the percentage of oxygen in the gases trapped 815 million years ago.

“We measured the oxygen at 10.3 to 13.4 per cent of the atmosphere, which would have been enough for animals to flourish.  In comparison, the oxygen content of modern Earth’s atmosphere is 20.9 percent.

“What is especially significant in this study is that we actually discovered a real atmosphere sample, where previous estimates have been made using indirect modelling methods.  We had a good idea about how to get at the ancient air, and it’s very pleasing that our hunch has paid off.”

Dr Blamey, who led the study, said the measurement was made possible by an international collaboration involving scientists from the UK, US, Canada, France, Australia and China. “This brought together expertise in technology, ancient rocks and the evolution of life, and built on years of experience crushing rocks exploring for gold, oil and gas,” he said.

Professor Uwe Brand, from Brock University in the US, also took part in the study.  He added: “This is really important evidence about the oxygen in the air, which helped one of the key events in the history of our planet, the rise of the animals.”