The key to New Year's resolutions: don't bite off more than you can chew
13 January 2016 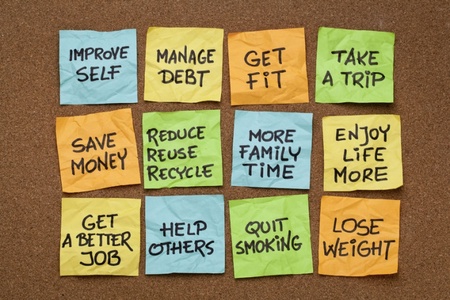 The key to successfully achieving those difficult New Year's resolutions is to know your limits and focus on one achievable goal at a time.

According to research from The University of Aberdeen and published in Psychological Science, when dividing their efforts across tasks, people fail to consider how difficult their goals are to achieve, and as a result, often set their sights too high or too low.  So, if the resolutions are going to be hard work with a high chance of failure, it’s best to pick one and focus all efforts on accomplishing it rather than trying to cover all bases.

Researchers Dr Amelia Hunt and Dr Alasdair Clarke conducted the research into how people prioritize in the School of Psychology at the University of Aberdeen.

Dr Clarke said: “If you are trying to achieve more than one difficult task you should focus your efforts on doing one thing properly instead of a half-hearted version of both. As obvious as this may sound, nearly every person in our experiments failed to adopt this strategy.”

In a series of experiments, volunteers completed a variety of different tests all designed to find how well they perform when trying to complete more than one task at a time.

Dr Clarke said: “The question we were asking is - do people manage to choose which strategy to follow based on how difficult the tasks are? We know that if both tasks are easy, to maximise chances of success you should do both, however, if they’re hard just go for one.

“We found it really surprising that when people are doing several difficult tasks they can’t prioritise and don’t follow strategies according to their own personal limits. This means they are less likely to succeed in any of the tasks. However, we know that if people focus entirely on one task, then they at least stand a good chance of successfully achieving it.

By choosing one thing then perhaps we can make real change but when trying to cover all bases, perhaps we don't invest enough in one thing to make much of a difference." Dr Alasdair Clarke

“In one task, participants were asked to throw bean bags into hoops that were arranged on the ground at varying distances apart. When the hoops were close together it was correct to stand in the middle of them, however when they are far apart, you should choose one and stand by it – that way you are guaranteed to always get one in.

“We found that people can’t do this task – they fail to change their strategy to take into account how difficult it is – this really surprised us. You’d think that we were better at making decisions like that.

“This simple task is a good way of demonstrating the underlying way our brains work and how we deal with decision making.  We have shown this in three very different tasks and can conclude that our findings can be applied to all types of human decisions and problems.

“By choosing one thing then perhaps we can make real change but when trying to cover all bases, perhaps we don’t invest enough in one thing to make much of a difference.

“We are currently trying to find a way to train people to adopt strategies to help in decision making – we want to find the most effective ways of teaching people how to use the correct thought process.”