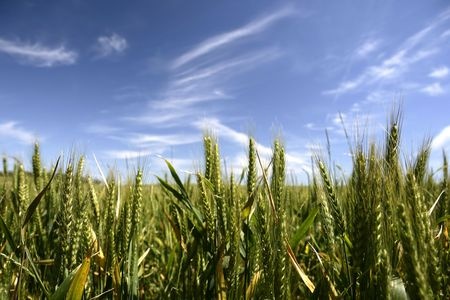 A new study from researchers at the University of Aberdeen, the Rowett Institute of Nutrition and Health, the James Hutton Institute, and the Alpen-Adria University in Vienna, shows that the UK's food self-sufficiency has decreased substantially over recent decades, as more food and animal feed are imported compared to 25 years ago.

The study, published today in the Journal of the Royal Society Interface, also shows that the environmental impact of the UK’s food is increasingly “outsourced” to other countries.

The research team calculated how much cropland was needed to produce the UK’s food and animal feed (the “cropland footprint”), and the emission of greenhouse gas emissions from synthetic and organic fertilizers, rice cultivation and land use change.

The results show that the total cropland footprint increased by 23% and that almost 70% of the total cropland footprint is now located overseas. The same trend was observed for greenhouse gas emissions: they are increasingly emitted overseas (from 50% in 1987 to 62% in 2008). Part of the decrease of domestic impact can be attributed to higher yields and lower fertilizer use on UK croplands, but by importing more food and animal feed, the overall effect is that the UK is increasingly outsourcing its environmental impact to other countries.

The quantification of the environmental consequences of UK food imports is novel.

Henri de Ruiter, PhD student at the James Hutton Institute and the University of Aberdeen, and lead author of the study, said: “The problem with official trade statistics is that they don’t always report the place of production.

In collaboration with researchers from the Alpen-Adria University in Vienna, we were able to develop an approach where we could identify the countries of origin and calculate the cropland footprint in these countries, as well as the greenhouse gases emitted" Henri de Ruiter

“For instance, according to official trade statistics, Britain imports bananas from Europe, which must be re-exports, because Europe does not produce bananas. As a consequence, it is not easy to calculate the environmental impact of bananas imported from Europe because we don’t know their origin. In collaboration with researchers from the Alpen-Adria University in Vienna, we were able to develop an approach where we could identify the countries of origin and calculate the cropland footprint in these countries, as well as the greenhouse gases emitted.”

The authors of the study emphasize that to reduce the environmental impact of the UK’s food supply, it is not enough to consider only the domestic environmental consequences of food production. “Because our current food system is so globalized in nature, it is important to consider the global effects related to our food consumption,” added Mr de Ruiter.

The University of Aberdeen and the James Hutton Institute are at the forefront of the research on global food security and the environmental impact of food. The current study was the result of a PhD project funded by both institutes, focussing on the relation between UK food consumption and global land use.

Recently, the University of Aberdeen and the James Hutton Institute were awarded prestigious funding for a major project, called “Delivering Food Security on Limited Land (DEVIL)”, allowing them to research the global links between food security and land use change, together with other global leaders in the field.