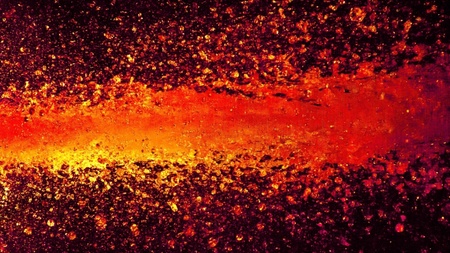 Scientists from the University of Aberdeen and the Australian National University (ANU) have discovered the world's longest known continental volcanic hotspot track in eastern Australia.

The so-called Cosgrove track was found to be nearly three times the length of the famous Yellowstone hotspot track in the United States.

Most volcanoes are found along the edge of tectonic plates, but hotspots are regions of volcanic activity at Earth’s surface that show no obvious association with plate boundaries. They are thought to form above mantle plumes – narrow upwellings of hot rock that originate at the Earth's core-mantle boundary, located almost 3,000 km below the surface.

A hotspot track is a chain of volcanism on the surface thought to be created by the tectonic plate drifting over the plume.  Classic examples include Yellowstone and the Hawaiian-Emperor chain.

The Aberdeen-ANU team were studying hotspot tracks in northern and southern Australia when they discovered that they form part of the same 2,000 km long track stretching across the continent from near Townsville in the north to near Melbourne in the south.  Both tracks were previously thought to be unconnected.

They made the discovery as they carried out research that provides the first convincing evidence that the thickness of the rigid, outermost shell of the Earth known as the lithosphere can control the type and volume of hotspot-related volcanic rock at the surface.  Details of the study have been published today, in Nature.

Professor Nick Rawlinson, from the University of Aberdeen’s School of Geosciences, explained:

“When material from a mantle plume reaches the base of the lithosphere it starts to melt, and if any of it eventually reaches the surface it will solidify into volcanic rock.  However, the composition and volume of the melt depends on the thickness of the lithosphere, and if it is too thick, then no melt will be produced at all.

“The Cosgrove track essentially consists of two parts in the north and south, with a centre section where the lithosphere is too thick to allow melt to form.

As well as discovering the world's longest continental hotspot track, our results provide direct evidence that lithospheric thickness has a dominant influence on the volume and chemical composition of hot-spot derived volcanic rock." Professor Nick Rawlinson

“Prior to our work people had recognised both tracks, but had never linked them because of the distance between them and the different compositions of volcanic rock.

“Samples along the Cosgrove track support the notion that these compositional variations result from different degrees of partial melting, which is controlled by the thickness of the lithosphere.

“So as well as discovering the world’s longest continental hotspot track, our results provide direct evidence that lithospheric thickness has a dominant influence on the volume and chemical composition of hot-spot derived volcanic rock.

“Furthermore, evidence from plate motion reconstructions that we used during our research suggests that the hotspot should now be located beneath north-west Tasmania, unless of course the underlying mantle plume has dissipated.

“So we are now going to be looking for any evidence of this in geological and geophysical datasets of the region, and this will help us determine whether there is any life left in this hotspot track after all.”