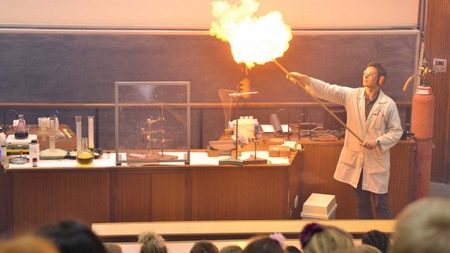 Chemists at the University of Aberdeen were surprised last December to receive letters from local primary school pupils asking academics to put on a science show for them as a festive treat.

Touched by the Oldmeldrum students’ thirst for science, Dr Alan McCue and Tomasz Majchrowski (PhD student in Chemistry) agreed to put on the show for them and pupils from St Peters and Sunnybank primary schools.

Aided by colleagues Dr Peter Henderson, Dr Abbie Mclaughlin and Kieran McManus, 120 pupils were treated to an array of spectacular demonstrations on March 19 which included an array of controlled fireworks, screaming Jelly Babies, sudden colour changes, superconductivity, hydrogen explosions and making ice-cream in 17 seconds – all carried out in a controlled and safe environment.

If our display encourages any of these pupils to pursue a career in this field, then I think it was definitely worthwhile." Dr Alan McCue

Dr McCue said: “When we saw that the pupils had written to us instead of Santa, we could hardly refuse to put on a show. It’s been a lot of fun, and I think they all enjoyed it.

“It’s nice that this has coincided with National Science & Engineering Week, and if our display encourages any of these pupils to pursue a career in this field, then I think it was definitely worthwhile.

“We are also very grateful to Euan Henderson (UoA Video Services) who filmed the whole event so that it could be visualised in real time to give the kids a better view and to Kalyan Veera (Photography – Medical Illustration) for taking some spectacular photos! It was a real team effort!”