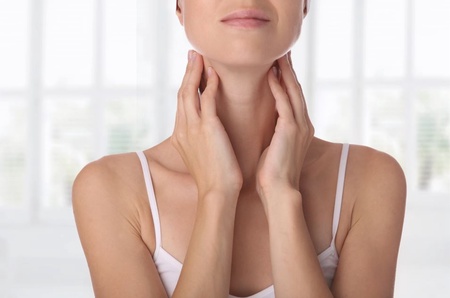 New research has found the adverse effects of thyroid dysfunction on labour market productivity could be a contributing factor to why women earn lower wages than men.

One in 20 people in the UK have a thyroid problem, with women six times more likely to suffer from the condition than men. Posing serious implications for the physical, mental and emotional life of those affected, thyroid patients are at greater risk of long-term sick leave and impairment of working ability.

While there is already evidence of the impact that chronic diseases have on various labour market outcomes, comparatively little is known about how thyroid dysfunctions influence the labour market prospects of those affected.

Released on World Thyroid Day (25 May), a study from researchers at the University of Aberdeen Business School has examined whether thyroid diseases, in particular hypothyroidism, contributes to gender differences in labour market outcomes and what difference diagnosis and treatment has on an individual’s career prospects.

Using data from the UK Household Longitudinal Study, the largest survey of its kind which tracks information from 40,000 homes across the country, researchers were able to map changes in individuals before and after being diagnosed with thyroid conditions and compare them to those not affected.

The study, conducted using data covering a 10 year period (2009-2018), found that women who suffer from undetected hypothyroidism earn 5% lower wages compared to women with no thyroid dysfunction. Once hypothyroidism was diagnosed and treatment assumed to start, however, the data showed their wages to rise.

No similar effect was seen on men with thyroid disfunction.

The research also found women improved their employment prospects once hypothyroidism was diagnosed. However, thyroid disease does not appear to play a significant role on an individuals’ labour force participation decision and their working hours.

“Analysis shows that individuals do not change jobs, get promoted or change grades once diagnosed with thyroid issues, suggesting the estimated wage effects might be driven by productivity gains,” said University of Aberdeen Professor Alexandros Zangelidis, co-author of the report.

“There have been many debates among policy makers in parliament in recent years highlighting problems with diagnosis and ongoing failures in the treatment of people with thyroid conditions.

“Thyroid dysfunction can easily be identified and, in most cases, treated. The analysis we carried out suggests that, if left undiagnosed, it can have a serious negative impact not only on the health and wellbeing of those concerned but also on their labour market prospects.

“It emphasises the importance of being tested and the potential labour market benefits that can be achieved through early diagnosis and treatment. The fact that women are more affected by thyroid dysfunctions than men amplifies existing gender inequalities in the labour market and suggests another contributing factor for the gender wage gap.”

Co-author Professor Catia Montagna, said: “This research has important implications for public health, as it suggests that there may be potential productivity gains that could be achieved through the early detection and treatment of thyroid dysfunction.

“The findings call for a deeper understanding of the consequences of untreated borderline thyroid levels and subclinical cases. Any new evidence on what may contribute to the gender gap can potentially help in formulating relevant policy interventions and initiatives in the labour market.”

This research has important implications for public health, as it suggests that there may be potential productivity gains that could be achieved through the early detection and treatment of thyroid dysfunction." Professor Catia Montagna

The full discussion paper can be found here.