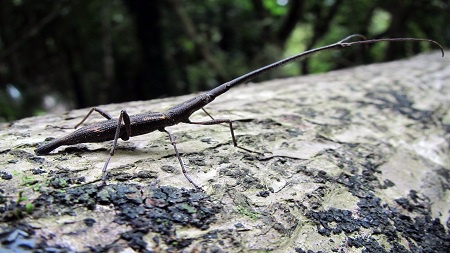 Scientists have found that for a little-studied insect, the New Zealand giraffe weevil, being bigger is definitely an advantage in the evolution stakes.

Specifically, while we know being big brings benefits in terms of mating success for an individual, we wanted to see if having bigger rivals could reduce mating success, and then determine if the negative effect of big rivals would change how evolution should play out." Dr David Fisher

Researchers from the Universities of Aberdeen and Waikato wanted to uncover how big a factor social selection plays in the evolution of the weevils.

The team’s study, which is published in Proceedings of the Royal Society B, found that when a weevil is looking for a mate if it is surrounded by bigger rivals its number of mating partners – and therefore fitness – begin to suffer.

Dr David Fisher from the University of Aberdeen said: ”Our research is about the evolution of New Zealand giraffe weevils, which are enormous insects - up to 9 cm long - that use their elongated heads as weapons to fight each other on tree trunks for access to mates. Specifically, while we know being big brings benefits in terms of mating success for an individual, we wanted to see if having bigger rivals could reduce mating success, and then determine if the negative effect of big rivals would change how evolution should play out. This could reverse the direction evolution travels so is a big deal!

“We found that weevils who share trees with big rivals suffer reduced mating success as a result, and this effect gets stronger the more weevils there are on a tree. If big weevils group with other big weevils, the presence of large rivals might reduce the benefit of being big, therefore slowing the evolution of this characteristic.

Co-author Dr Chrissie Painting from the University of Waikato in New Zealand, added: “We already knew that larger weevils are ‘fitter’ as they survive longer and enjoy higher mating success. But finding this negative effect of big rivals is new. What’s more, we found this to be the case in both male and females, which surprised us as we don’t usually expect females to be competing for a mate, whereas males typically are.

“We also found this negative effect of large rivals gets stronger the more weevils there are, so if there are lots of weevils living together on a tree trunk, then the presence of the biggest rivals really reduces the others fitness. This tells us that social selection could influence evolution most strongly at high densities and less so at low densities.

“However, we found no correlation by body size among groups of weevils, so each cluster we studied was essentially a random collection of different sized weevils. This means that social selection will not contribute to evolutionary change, which will instead be mostly governed by the positive direct selection for body size. This implies that weevils should be getting even longer with each generation, but there is still a need for further work in this area to determine if this is the case.”