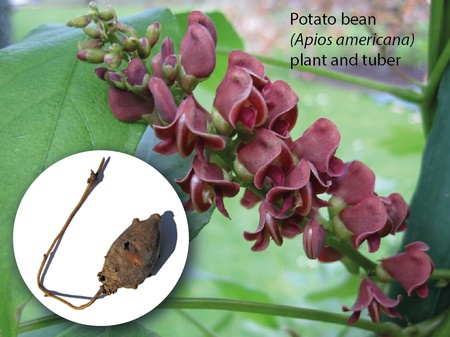 Scientists have found that a plant native to America has potential to be grown in the UK, bringing with it huge benefits for a balanced, sustainable diet.

Apios Americana –potato bean which is high in protein – is commonly found in Florida, Texas and Colorado and was once a staple foraged food source.

Researchers from the University of Aberdeen Rowett Institute, Scotland’s Rural College (SRUC) and Royal Botanic Garden Edinburgh (RBGE) studied the potato bean to investigate whether it could be used as part of a healthier and biodiverse diet while also potentially helping the environment by being a dietary source of protein.

The study is published in Journal of Food Composition and Analysis and was funded by the Scottish Government’s Rural and Environmental Science and Analytical Services Division (RESAS).

Dr Madalina Neacsu from the Rowett Institute said: “We studied the Apios Americana – or potato bean – as part of our research into novel and sustainable sources of protein and fibre in a bid to find alternatives and to diversify our dietary choices.

“The majority of people’s protein intake in the UK currently comes from animal sources, however if we could diversify our recommended dietary intake of protein from plant-based sources, such as the potato bean, this could contribute towards meeting climate targets as well as improving health.

“The potato bean has shown previously that it can adapt to a wide geographical range and has a high tolerance to a wide range of conditions, so it is able to grow in environments away from America.”

if we could diversify our recommended dietary intake of protein from plant-based sources, such as the potato bean, this could contribute towards meeting climate targets as well as improving health." Dr Madalina Neacsu

Dr Max Coleman from RBGE added: “Wild species related to crops are an enormous resource for agriculture and the importance of conserving their genetic resources is a significant role for botanic gardens today. With the combination of taxonomic and horticultural expertise, we have a part to play in working with institutes with a focus on crop genetic resources.”

“The potato bean is one example of the potential of wild plants to diversify our diet and build resilience in agriculture. There are an estimated 30,000 edible plants available to us and yet widespread consumption only involves about 150 of them. Just 12 crops provide 80% of our calories, meaning we rely on less than 1% of the food plants available to us. There is considerable exciting work ahead.”

For this work Apios Americana was sourced from two growing sites in UK; South and North and systematically characterised for its nutritional and chemical content. Specifically, the team have determined the macronutrient (protein, fibre,  fat), micronutrient (microelements and minerals), and non-nutrient (bioactive phytochemicals) content of the tubers and all potential agricultural and food co-products such as peel, rhizomes and leaves revealing and discussing the potential this plant could have for diet biodiversification and revalorisation.

Dr Neacsu continued: “The potential benefits of the potato bean are promising – it is a rich source of protein and fibre, representing a good way to boost fibre consumption with can be a struggle for many people.

“We also found in Apios samples that it contained all the essential amino acids that we need to make proteins in the body. The peel and leaves are also a rich source of the bioactives which are normally found in superfruits such as berries.”

Dr Robin Walker from SRUC added: “Going forward, there seems to be definite potential in the implementation of new crops and foods being grown here in the UK that could help people maintain a more balanced diet. Further trials are now needed to gain more insight into the best way to grow and utilise Apios on a broader scale, taking into account its perennial growth habit and the potential to use its foliage and seeds as well as the tubers.”