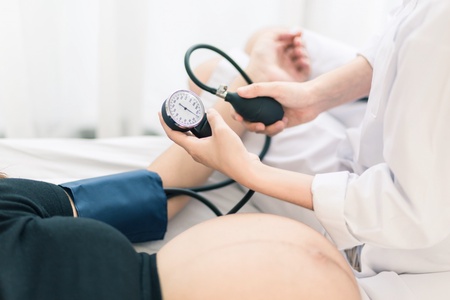 Samples taken from more than 400 Aberdeen women contributed to a major global study which offers new insights into the cause of the dangerous pregnancy complication pre-eclampsia.

Pre-eclampsia increases blood pressure and puts pregnant women at risk of brain injury, impaired kidney and liver function, blood clotting problems, fluid on the lungs, seizures and, in severe forms or if left untreated, even the death of the baby and mother.

It affects up to five percent of women and women who have a family history of pre-eclampsia are at greater risk of developing the condition themselves.

To help scientists better understand the underlying causes, volunteers were sought from Aberdeen’s world-leading Maternity and Neonatal Databank, which was initiated by the late Sir Dugald Baird in the 1950s.

The majority of women who took part in the study did so in the late 1990s after being identified through the databank but many had had their babies decades earlier.

This information has now helped to piece together an important part of the jigsaw when it comes to understanding how the risk of pre-eclampsia is passed on through the generations.

In a study published today in Nature Communications and involving researchers from the UK, Iceland, Finland, Norway, Denmark, Kazakhstan and Uzbekistan, scientists have identified that the same genetic factors which put people at increased risk of high blood pressure and increased BMI, also contribute to the risk of pre-eclampsia.

Professor Zosia Miedzybrodzka, Professor of Medical Genetics at the University of Aberdeen one of the authors of the study, said the contribution of Aberdeen women who have ‘long since forgotten’ that they took part in the study is reaping rewards for researchers today.

“The women, who were all treated in Aberdeen Maternity Hospital, agreed to give their DNA and to be included in the study,” Prof Miedzybrodzka said.

“Many years have passed and they may not think this contribution made any difference but without it, increasing our understanding in this way would simply not have been possible.

“The genetic risk of pre-eclampsia and what causes this has been a mystery for many years.”

Pre-eclampsia contributes worldwide to the death of estimated 50,000 women and up to 1 million babies annually. The condition is also known to increase the risk of cardiovascular diseases among mothers and their children later in life.

Professor Miedzybrodzka added: “Pre-eclampsia is a terrible condition in its worst form and we now have additional clues as to why this happens.

“The contribution made by Aberdeen women, and the many others around the world who kindly agreed to take part in this research is vitally important.

“It could lead to better outcomes from women – who may be their own daughters or grandchildren - by helping us to understand how to treat the condition.”