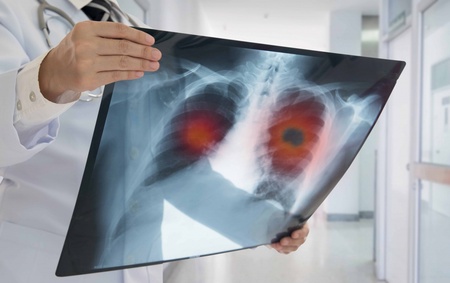 Lung cancer affects more than 5000 people every year in Scotland and within a year 4000 have died, usually because the diagnosis is made too late for curative treatment.

Now results from the Early detection of Cancer of the Lung Scotland (“ECLS”) trial have shown a combination of blood tests followed by CT scanning can help detect lung cancer earlier, when surgery is still possible.

The trial has demonstrated a statistically significant 36% reduction in late stage diagnoses of lung cancer. The University of Aberdeen is involved in the project.

Professor Frank Sullivan, Professor of Primary Care Medicine at the University of St. Andrews, the Chief Investigator for the ECLS trial, said: “I hope that the results of this trial will have globally significant implications for the early detection of lung cancer by showing how a simple blood test, followed by CT scans, is able to increase the number of patients diagnosed at an earlier stage of the disease, when surgery is still possible and prospects for survival much higher.”

Results from the trial have been published by The European Respiratory Journal in an online pre-print of the peer-reviewed results.

The ECLS trial is believed to be the largest randomised controlled trial for the detection of lung cancer using blood-based biomarkers.

The trial is supported by the University of Dundee, NHS Tayside and co-funded by Oncimmune, the Scottish Chief Scientist Office and the Scottish Government.

It involves collaborators at the University of Glasgow, with further work from the Universities of Aberdeen, St Andrews, Nottingham and Toronto, NHS Scotland, Scottish Government, The Canberra Hospital and Oncimmune, the company that developed the new blood test. Tayside Clinical Trials Unit was responsible for trial delivery, data management and analysis.

Professor Shaun Treweek, from the University of Aberdeen, added: "Early diagnosis really matters in lung cancer and these results suggest that the blood test, combined with CT scanning, can pick up cancers earlier when treatment options are greater.

Early diagnosis really matters in lung cancer and these results suggest that the blood test, combined with CT scanning, can pick up cancers earlier when treatment options are greater. " Professor Shaun Treweek

"It’s a bit early to draw firm conclusions but the signs are good.  Over half the people involved in the trial came from more socially deprived communities too, which is rather rare in trials despite people in these areas often having the poorest health.  It is something we should do more of."

In addition, the ECLS trial results indicated a lower rate of deaths among people in the intervention arm of the trial after two years compared with people in the control group.

Lung cancer-specific deaths were also lower in the intervention group. This suggests that the EarlyCDT Lung test followed by CT imaging could produce a mortality benefit: the three-year follow up data which is scheduled to be imminently available, will be valuable in understanding the significance of this finding.

Earlier diagnosis means that more patients should benefit from newer, more effective, chemotherapy, surgery and radiotherapy and so reduce the impact of this disease.

Further follow-up analyses will be performed after five and ten years.