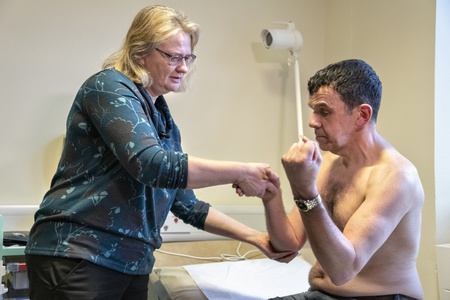 One of the first people in Scotland to take part in a new clinical trial for Huntington's Disease says the programme gives him hope for the future.

Sandy Patience, 57, originally from Avoch on the Black Isle and now living in Inverness, is among only nine people in Scotland and 801 globally to be taking part in the Roche Generation-HD1 study, being led in Aberdeen by Professor Zosia Miedzybrodzka of the University of Aberdeen.

The study aims to find out if a new gene blocking compound can slow the progression of the disease.

Huntington's disease – often known as HD – is an inherited condition that stops parts of the brain working properly over time. It causes increasing memory difficulties, psychiatric problems and twitchy movements which the person cannot control. It is usually fatal around 20 years after it becomes obvious. There is currently no effective treatment to halt or slow its progression.

HD is caused by a faulty gene.  Each child of a parent with Huntington’s has a 50% or one in two chance of developing the condition.

According to Huntington’s Disease Association (HDA) around one in 10,000 people have Huntington's.

Sandy, a railway signalman, says the disease has taken ‘everyone he has ever loved’ and that participating in the trial is what has kept him going since he received his own devastating diagnosis on December 4, 2017.

He said: “Huntington’s Disease has had a massive effect on all my family. Everyone I have ever loved has been affected by this illness.

“My mum was 59 when she died and although I was 21 at the time, I never really knew her well as the disease took so much from her. I had a very difficult childhood - instead of going to play football my life was going to the hospital to visit relatives struck down by this horrible illness.

“Over the last nine years I’ve watched my dear sister deteriorate in a care home. Huntington’s has robbed her of everything apart from her wonderful wit and a determination to keep going.”

Sandy said it was particularly difficult seeing those he cares about suffer with the knowledge that his own genetic risk was so high.

“Huntington’s Disease eats people up. It destroys families not just through the disease but through the strain it puts on relationships,” he added.

“Seeing family members suffer and understanding that might also be your future is a very difficult thing to deal with.”

In 2017, Sandy decided that he could no longer live with the uncertainty of not knowing whether he had inherited the condition. He decided to undergo a genetic test at the North of Scotland HD clinic, which is based at Aberdeen Royal Infirmary. On December 4 he travelled on the train to get his results hoping he could ‘put the threat of the disease to bed’.

“I’d spent my whole life living in the shadow of Huntington’s and I thought ‘that’s it, you’re not going to get me any more’.

“But when the test was positive I came out absolutely devastated. I even asked my dear wife Laura to find someone else because of my understanding of my diagnosis, because I loved her so much. Her response was the same back ‘but I love you too much to leave you’.

“I was at such a low point I didn’t know how I could go on but fortunately that feeling didn’t last long.

“A few weeks later I watched the BBC News at lunchtime and it was saying about the success of the phase one trial for this study. I nearly fell off my seat.

“I have waited 50 years for this not just for me but for everyone – my mum who is no longer here and all the people who have been affected by this not just in my life but around the world.

“As soon as I saw the report I thought ‘I’ve got to chase this, I want to be one of those to take part and play my own small part in taking the fight to Huntington’s.”

The trial drug is an ASO (antisense oligonucleotide). This is a short strand of genetic code that will bind to the mutant Huntington gene product (mHTT). It is hoped this process will lower the active mHTT levels in the brain and therefore, hopefully slow the progression of HD, and lead to a much-improved quality of life.

Aberdeen is one of 11 sites across the UK participating in the worldwide trial which takes in 15 different countries.

Sandy travels every two months from his home in Inverness to Aberdeen Royal Infirmary where a sample of his brain fluid is taken for analysis, after which, a trial drug (RG6042) or a placebo is administered.

He added: “I’m hoping against hope that I am on the trial drug but even if I’m on the placebo the trial has had a very positive effect on my life.

“From a real place of darkness I am now able to focus on the good. I could write a book about the illness and its effects but right now I’m too busy living.

“To me it’s a privilege to take part and I feel like this is what I have been born for in a way so I am so enthusiastic not only about the tests but completing the daily tasks we are set from the cognitive stuff to walking itself and doing turns in between two points. Even my labradoodle Rolo feels like he’s taking part!

“I don’t mind dedicating my time to the trial because it’s so important. When I was coming back on the train having received the bad news two years ago I never imagined I’d be at this point and I couldn’t have got here without my wonderful wife Laura and the support of the researchers.

“It feels like I’m doing something positive for the first time to fight this horrible illness and make a difference to people’s lives in the future.”

Professor Miedzybrodzka said: “Generation-HD1 is a truly ground-breaking phase 3 trial, bringing together researchers from around the world to work on we hope will be one of the definitive studies in the field of Huntington’s research.

“Obviously, there is a long way to go yet, but the trial does offer real hope to families with HD.

“The volunteers taking part are playing an important role for the entire Huntington’s disease community. No more volunteers are needed for this study, but our clinic patients can take part in other research projects.

“We are exceptionally grateful to each patient taking part like Sandy, and their families for supporting them, and the many NHS and trial staff who are bringing this world-class study to the North. I also want to thank all of the patients, families and donors who have supported all of our HD research in Aberdeen over the last 35 years, without whose generosity we would not have been selected as one of the Generation-HD1 trial centres.”