Study warns of disinfectant use in hospitals
11 March 2019 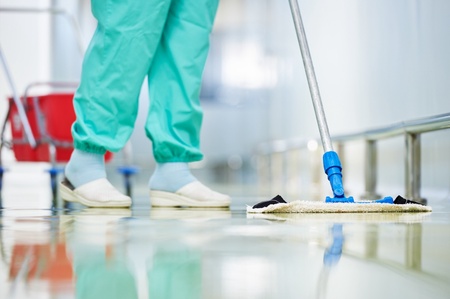 The use of disinfectants to clean and control infections in hospitals should be regulated in the same way that prescribing antibiotics is, according to researchers from the University of Aberdeen.

In a study published in Nature Microbiology, Dr Karolin Hijazi, Senior Clinical Lecturer at the University of Aberdeen Institute of Dentistry, in collaboration with Professor Ian Gould, Consultant Microbiologist at Aberdeen Royal Infirmary and colleagues at the University of Leicester analysed resistance to disinfectants in a specific type of bacteria.

The team looked at Staphylococcus epidermidis, a type of bacteria found on the skin of healthy people and is traditionally considered harmless.  They previously found that in environments with a high concentration of disinfectant, such as intensive care units, this otherwise benign bacteria can become pathogenic and multidrug resistant.

When this happens, the drug resistant strain can potentially transfer ‘resistance’ genes to Staphylococcus aureus, which then transforms into ‘superbug’ MRSA.

Professor Gould explains: “Our research shows that in environments with a high concentration of disinfectant, this previously harmless bacteria can develop resistance to treatments commonly used to treat infection.  This is potentially a very significant public health issue and highlights the importance of investigating how these bugs can become resistant to disinfectants.’

Our results suggest that we need to change the way we think about using disinfectants, particularly in the hospital setting. " Dr Karolin Hijazi

Dr Hijazi added: “Basically, we are saying that intensive use of the particular disinfectants used in hospitals can contribute to the prevalence of bugs that are resistant to most antibiotics commonly used to treat infections.

“Our results suggest that we need to change the way we think about using disinfectants, particularly in the hospital setting.

“We are all aware of the problems associated with the overuse and misuse of antibiotics and similarly, there is evidence that the use of disinfectant in hospitals should be regulated more strictly.”