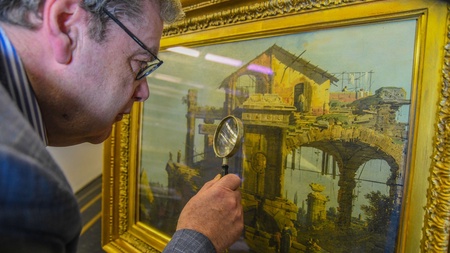 An artwork only recently confirmed as a piece by Venetian artist Canaletto (1695-1768) is to go on display at the University of Aberdeen's Sir Duncan Rice Library Gallery in a new exhibition.

Canaletto in Aberdeen will display ‘Ruins of a Temple’, recently discovered to be an original of Giovanni Antonio Canal, better known as Canaletto. The painting has been held in the University’s collections since 1865 and was often thought to be from the school of Canaletto, but it was not until 2018 that it was confirmed to be an original by the Venetian artist himself.

Many of Canaletto’s paintings depicted Venice’s famous canals, however the painting on display is a capriccio – an architectural fantasy with a collection of many different elements brought together for the purpose of aesthetics. Canaletto’s imagined scene shows a ruined classical temple on the outskirts of a city, perhaps based on Rome or Padua, with a number of small figures of people living among the ruins and pursuing domestic activities such as hanging out clothes to dry.

Christina Mackenzie, Curatorial Assistant involved in the creation of the exhibition has said: “The exhibition is something a little different to others we’ve done in the past; it’s only going to be on display for five weeks and focusses on one artwork. The discovery that this piece is an original Canaletto is fantastic, it’s great to be able to put it on display for the public.”

‘Ruins of a Temple’ will be on display for a limited time in the Gallery on the Ground Floor of the Sir Duncan Rice Library, in a small display alongside other related works from the University’s collections: View of the Grand Canal with San Simeone Piccolo and the Scalzi, attributed to Canaletto’s father Bernardo Canal (1673-1744), and a recently acquired impression of Canaletto’s most famous etching, The Portico with a Lantern (c.1740-44).

The exhibition is something a little different to others we've done in the past; it's only going to be on display for five weeks and focusses on one artwork. The discovery that this piece is an original Canaletto is fantastic, it's great to be able to put it on display for the public." Christina Mackenzie, Curatorial Assistant

Senior Lecturer in Art History at the University, John Gash, remarks “Canaletto was not only one of the greatest painters of the eighteenth century but one whose characterization of many small figures in spacious, outdoor architectural settings epitomizes the Enlightenment’s fascination with society. It was therefore a great pleasure to be able to confirm, with the help of two outside Canaletto specialists, Charles Beddington and Francis Russell, that ‘Ruins of a Temple’ tin Aberdeen University was, in fact, a stunning original, as I had suspected, rather than a studio work as sometimes thought”.

Canaletto in Aberdeen is on display 21 January – 22 February 2019 in The Gallery in The Sir Duncan Rice Library, Bedford Road, Aberdeen AB24 3AA

The Gallery is open Mon-Fri 9am-5pm