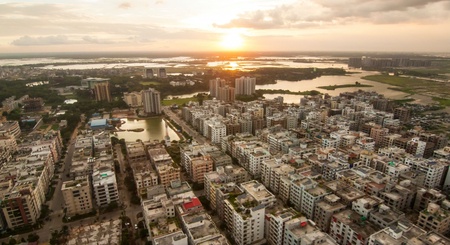 Scientists at the University of Aberdeen are embarking on a major study to determine how exposure to toxic metals might contribute to high rates of heart disease in South Asia.

The Bangladesh Risk of Acute Vascular Events (BRAVE) study, led by the University of Cambridge, is a case-controlled study of thousands of Bangladeshi citizens that is investigating the reasons for the country’s high rates of coronary heart disease.

A variety of potential contributory factors are being explored as part of the study, including whether exposure to toxic metals could put people at risk.

A team from the University of Aberdeen’s Department of Chemistry, led by Professor Joerg Feldmann, will study toenail samples from thousands of individuals in order to determine rates of exposure to arsenic and other toxic compounds.

Professor Feldmann said: “Coronary heart disease is increasing at a greater rate in South Asia than in any other region globally, but there are few studies that explore this issue.

“Of all South Asian countries, Bangladesh probably has the highest rates of cardiovascular diseases and yet is one of the most neglected for vascular research.

Coronary heart disease is increasing at a greater rate in South Asia than in any other region globally, but there are few studies that explore this issue." Professor Joerg Feldmann

“This isn’t just a local issue - in the UK, the incidence of heart disease and stroke is higher than among immigrant Bangladeshis than every other immigrant group, and much higher than in indigenous Western populations.”

Already underway, the BRAVE study has recruited 15,000 individuals, half of whom have suffered a heart attack, with the other half acting as a control group.  All of the participants live in Dhaka, Bangladesh’s capital city.

Professor Feldman’s team will take toenail samples from individuals as a low-cost, effective measurement of toxic metal exposure - especially arsenic and its metabolites.

“Toenails are ideal for this study because they are not exposed to things that people might handle directly which might skew the results – like cigarettes for example.

“Our main challenge will be in ensuring that we dissolve the nail in a solution that doesn’t destroy arsenic metabolites, but still makes it possible to determine other toxic elements so we can take accurate measurements.

“From there we hope to obtain enough data to identify potential risk factors that are contributing to the rising trend of heart disease in Bangladesh and other south Asian countries.”