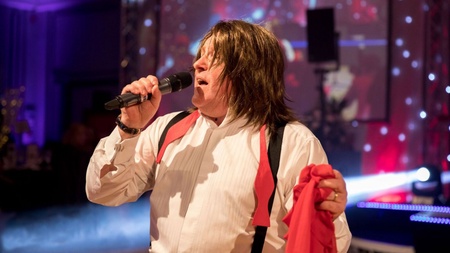 An event to raise money for University of Aberdeen Alzheimer's research which saw four novice singers perform after receiving a 'crash course' from composer-to-royalty Professor Paul Mealor has raised more than £60,000.

Local businessman Charlie Bain and his wife Carol are long-term fundraisers. Together they organised the event, with Charlie performing in front of invited guests at the Mercure Ardoe House in Aberdeen.

Charlie, who donned a matador outfit for his rendition of Bizet Carmen opera Toreador song, which he sang in French, as per the original, was joined onstage by his fellow singing ‘newbies’ Carol Benzie, Managing Director of Aberdeen International Airport; Sylvia Halkerston, consultant and non-executive director, and former chief executive of Wood Group Bob Keiller.

Bob Keiller took on Meatloaf’s Bat out of Hell decked out with a flowing wig and clutching the iconic singer’s trademark handkerchief. Carol Benzie’s performance of Be My Guest from Disney’s Beauty and the Beast saw her dress as the candlestick character Lumière, whilst Sylvia Halkerston teased the audience with her feather boa as she belted out Shirley Bassey’s Hey Big Spender.

All four were coached by Professor Paul Mealor, who composed the music for the royal wedding of the Duke and Duchess of Cambridge, and colleague Dr John Frederick Hudson.

The first-time singers were complimented by performances by Kristina Rihanoff and Robin Windsor, formerly of Strictly Come Dancing, and singer songwriter Beth Sherburn.

Different Singing Memories is the fifth such event Charlie has organised after being spurred on in his charity work by witnessing what Alzheimer’s disease was doing to his dad and father-in-law, both of whom succumbed to the disease within weeks of each other.

After meeting Professor Matteo Zanda, chairman of medical technologies at the University of Aberdeen and director of the John Mallard Scottish PET Centre, Charlie has focussed on funding research at the University that is attempting to find a cure for the disease.

“Again I’d like to thank Professor Mealor and Dr Hudson for all their coaching efforts – I hope we did them proud. We’ve raised some more money for such an important area of research so thanks to everyone who attended and to all our sponsors for making this possible.”

This year’s event was generously supported by Gold Sponsors Apache North Sea Ltd and Entier Ltd and will raise funds to support a dedicated studentship researching into a specific area of the disease. Previous events have raised funds to purchase cutting edge research equipment.

Professor Matteo Zanda added: “With the fantastic support of this event, the University of Aberdeen will recruit a PhD student dedicated to dementia research.

“This researcher will study a new class of molecules for monitoring and treating dementia using the hi-tech scanning equipment purchased from the funds of previous events.

“This approach shows great promise and could pave the way for new techniques to monitor dementia and deliver targeted therapies.”