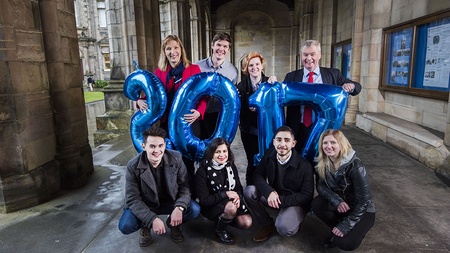 Three University of Aberdeen graduates have been named in the 2017 shortlist of academic entrepreneurs for Scotland's leading company creation competition - the Converge Challenge.

The University is represented in all three categories of this year’s competition.

Rotimi Alabi, a graduate, has reached the Top 10 of the overall Converge Challenge award with RAB-Microfluidics - a cutting edge microfluidic 'lab on a chip' technology that can provide real-time heavy machinery monitoring and early problem diagnostics.

Post-graduate, Liam McMorrow has reached the Top 10 of the KickStart award category with Insulin PenPal, a health technology company which aims to make life easier for people self-managing chronic diseases.

Rana Abu-Mounes has reached the Top 5 of the Social Enterprise award category with Al-Mushkah, a social enterprise that will provide consultation and training services to Muslim women.

The shortlisted candidates continue the University of Aberdeen has a long record of success in the competition. Erika Grant won the Social Enterprise category in 2016 with Project TurnKey while James McIlroy picked up the same award a year earlier with EuroBiotix

Caroline Barelle was runner-up with Elasmogen in the main Converge Challenge category in 2015.

The judging process has shortlisted 25 nominees across the competition’s three award categories:

The shortlisted nominees represent 12 Scottish universities from across the country and 44% of this year’s finalists are female highlighting increased female participation year on year.

Finalists will now go through to the final stage of the company creation competition and entrepreneurship development programme with the opportunity to win cash prizes and in kind business support packages from the total prize fund valued at over £170,000.

Converge Challenge is Scotland’s leading company creation competition and entrepreneurial development programme for staff, students, and recent graduates of Scottish universities and Research Institutes. Converge Challenge represents all of Scotland’s 19 universities and research institutes demonstrating the strong collaborative enterprise agenda in Scotland. It has trained 180 company founders and 120 early stage and social enterprise founders that have created 78 companies with a 43% incorporation rate. 77% of those companies have received follow-on funding totaling to £60 million and have a 78% survival rate post three years.

The winners of each of the three categories will be announced at a Converge Challenge awards ceremony on Thursday, September 28, 2017 at the Glasgow Science Centre.