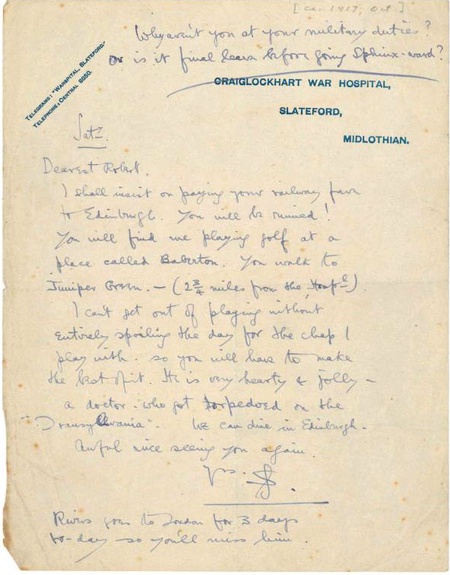 In April 1917, war poet Wilfred Owen was diagnosed with shellshock and sent for treatment which eventually took him to the Craiglockhart Hospital in Edinburgh - and led to a friendship with another literary great, Siegfried Sassoon.

His time in the city also resulted in a meeting between the two poets and a third, Robert Graves, described as “potentially the most powerful meeting of English literature in the 20th century”.

But for 100 years the venue for this meeting has remained a mystery. Now a University of Aberdeen lecturer and war poetry enthusiast has unravelled a series of clues found hidden in the archives of an American University which he says finally pinpoint the location where the trio united – Baberton Golf Club in Juniper Green.

Neil McLennan, a former head of history at Tynecastle School who now works as Senior Lecturer at the University, has spent more than 10 years researching Wilfred Owen’s life.  His interest in his time in the capital began when he learned that as part of his recovery from shell shock, Owen also taught at the Edinburgh School.

“Confirming this venue has been something that I really got between my teeth,” he said.  “We always knew the three men met in Edinburgh but not where. It was thought to be a golf club owing to Sassoon’s love of the game.  He claimed to have played in most courses in the area. Mortonhall Golf Club and Merchants Club had many officer patients playing there.  However I could find nothing to confirm them as the meeting place.  Oxford based scholar Dominic Hibberd had floated Baberton but before his death when I corresponded with him he could not cite, confirm or corroborate this.

“Many may wonder why this matters but it is an important piece of the city’s literary history. One of Edinburgh’s golf clubs can say it held potentially the most powerful meeting of English literature in the 20th century.  The three most significant war poets were there.

After scouring UK libraries and archives for clues, Mr McLennan found the answer in letters written in 1917 now held in Southern Illinois University, which he learned about through a fortuitous conversation with an American archivist.

“There for all to see is a letter from Siegfried Sassoon to Robert Graves,” he added. “In it, he describes how he has a golf match on the day of Graves’ visit, which unsurprisingly he did not wish to cancel, and he asks Graves to travel to meet him at Juniper Green and Baberton Golf Club specifically.

“Further correspondence indicates that between the letter being sent and Graves arriving it was decided that Owen would be sent to collet Graves and bring him to Baberton Golf Club.

“Owen clearly made an impression on Graves.  He had met Graves only this one time however was invited to Graves wedding the following year. Sassoon had already been acting as a somewhat poetic mentor to Owen, however, now another poet recognised his talent and between Graves and Sassoon, Owen is introduced to the good and great before he returns to war service.

“This find means that Baberton Golf Club can now say it held potentially the most powerful meeting of English literature in the 20th century. “

Alan Goodman Baberton Golf Club Captain said: "We were excited to learn that this historic meeting took place in our clubhouse and led to such an important collaboration between three of Britain's greatest war poets. We intend to create a permanent reminder of this meeting for members and visitors to view."

Mr McLennan presented his findings at the University of Aberdeen’s First World War Conference:  Imagination and Memory Since 1914 and will share his research as part of an event at the University’s May Festival next month.