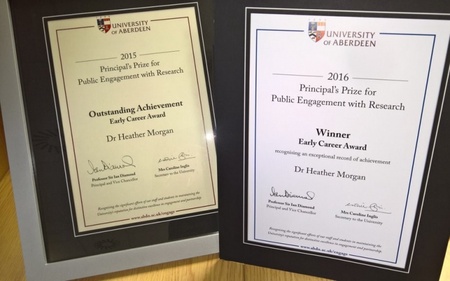 Delivery of Care Research Fellow, Heather Morgan, was awarded our Principal's Prize for Public Engagement with Research, Winner (Early Career Award), at this weekend's May Festival, held annually at the University. This builds on Heather's Outstanding Achievement award in the same category last year.

Heather leads and contributes to a range of public engagement activities throughout the year. This year, Heather continued to build on her track record of engaging publics through a range of events. These included: organising an interactive and augmented reality second hand smoke stand at the May Festival (May 2015) in partnership with the Scottish Government; running digital health education sessions through the TechFest schools outreach programme; leading public 'health and history' walks as part of the Festival of Social Sciences (Nov 2015) and SPECTRA (Feb 2016) (in conjunction with the University Library and a local business); publishing on emerging digital health concerns in The Conversation (Dec 2015), giving national and international radio interviews (following publication in The Conversation), co-presenting a CafeMED event on electronic cigarettes (Jan 2016), being invited to speak about her research on smoking at the Scottish Parliament (Mar 2016), co-facilitating and leading multi-stakeholder discussion events on chronic conditions management at The Health Foundation (Nov 2015) and digital technologies for condition and healthy lifestyle management at The Wellcome Trust (Apr 2016), filming a YouTube video on her current research into digital health (launched Jan 2016) and appearing on an online television debate on electronic cigarettes (Jan 2016).

Heather also organised a full day of externally-facilitated public involvement in research training at the Health Services Research Unit (Nov 2016) to build capacity among colleagues. This led to her co-founding our ‘Public Involvement in and Engagement with Research’ working group (a team of 12), which delivered its launch event at May Festival (2016), focusing on the cycle of research ‘behind the NHS bed-curtains’ (systematic reviews, primary research and clinical trials). This year’s May Festival also saw the soft launch of a health and wellbeing ‘app’, which Heather is co-developing as part of an extended collaboration following the ‘health and history’ walks, funded by a University of Aberdeen Knowledge Exchange and Commercialisation grant. In addition, Heather performed at the Cabaret of Dangerous Ideas, where she put to the audience a rather dystopian picture of the future in which people’s health behaviours are tracked using monitoring technologies, which link up to NHS records, reflecting some of the issues emerging in her current research.

In sum, I create and seize opportunities to engage publics with my research and commit to this as core academic business."

Heather said: “My public engagement with research activities are varied and so their impacts on and benefits for the wider community are similarly diverse and indeed refer to a number of communities. They mostly address health and wellbeing from a health services research perspective, but are not limited to my own social science background: I often combine a number of disciplinary approaches in my events, representing and educating in the work of clinical, statistical, trials and ethics colleagues, as well as my own. I also promote careers (including for social scientists) in STEM more generally, especially for girls (via ScienceGrrl). I am also keen to incorporate ideas offered by members of the public into my research going forward. Some of the questions raised and audience discussion at the Cabaret last night have definitely given me some new ideas to focus on. I use social media to extend engagement. I have a professional/personal account @hm_morgan, a research project account @selfhealthtech and I am also co-ordinator for our research group’s account @hsru_aberdeen. I find that using different strategies across these accounts helps to engage different audiences and raise awareness.”

Heather finished: “In sum, I create and seize opportunities to engage publics with my research and commit to this as core academic business.”