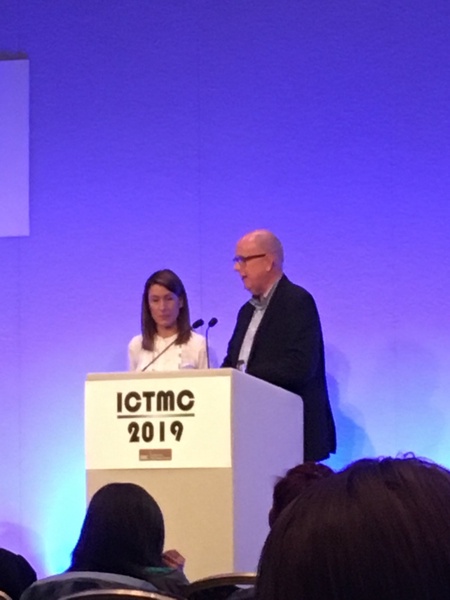 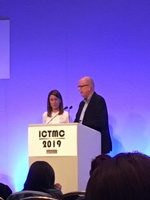 Several members of the HSRU team attended the International Clinical Trials Methodology Conference (ICTMC) in Brighton last week. It was a fantastic conference with ubiquitous examples of world leading methodological research being presented. Three of the HSRU team in attendance were patient partners and one of them, Andrew Worrall, has provided an excellent summary of the conference from a patient’s perspective.

When the band came on to play at the conference dinner it did so to an arrangement of Also Sprach Zarathustra, music that it’s impossible for some of us to hear without thinking of a sun rising over a big black obelisk and a chimpanzee throwing a thigh bone which becomes the most wonderous spacecraft in film history. It was a reminder that, at least according to Arthur C Clark, man is on a journey of exploration which might in fact be a clinical trail conducted by aliens. It doesn’t end particularly well.

Janet Dancey, in her opening keynote address, was clear that clinical research should not be an alien venture. While there is a complex and often conflicting set of requirements involving ethics and methodology, specific purpose and general applicability, she put down a marker in terms of the need for clinical research to be accountable to patients and the public. It was useful, then, to see how many of the subsequent presentations followed this lead.

I had been warned that this was not a conference for those outside the academy. I was certainly astonished to find 700 trial methodologists in one place, and these just the tip of the iceberg since each of two hundred presentations and 300 posters appeared to have a dozen authors (though some names cropped up multiple times).

Once we had gone through the hermetic seal of the Metropole’s revolving door this was a place with its own carefully controlled environment, not unlike the Space Odyssey’s revolving ships, but some contributors reached out effectively to the world beyond. Meta-analysis of processes one or more steps removed from patient experience may have been the subject of some, especially statistical, presentations but the reality of life on earth was never too far away and most presenters seemed willing to ask appropriately patient-centred questions. This was not least because, as more than one said, failure to recruit and retain patients in trials was what kept them awake at night, so amid all the complexity it was people who were the most problematic factor. Our PRIORITY II priority-setting partnership on retention (PS1A-05) therefore caught one of the important cross currents in the whole conference.

Which is not to say that everything showed quite such a degree of public awareness. Relatively few of the posters paid attention to PPI beyond the assertion that there had been consultation and a box had been ticked. Not much research had been initiated and instigated by patients and the public. Few posters or presentations demonstrated any PPI oversight in governance and finance. Sometimes PPI looked like a means to an end, feeding the academic machine – not so much 2001 - A Space Odyssey as Alien.

However, that is not the predominant mood of my notes from the three days. In every session I attended there was some sense of researchers striving for genuine collaboration in pursuit of a mutually beneficial purpose. For example, Karen Coulman from Bristol Medical School (PS2D-02) presented an ethnographic study of patient and public involvement in trial oversight which chimed with my experience and seemed to signpost key concerns, while Linda Biesty from NUI Galway ((PS2D-04) enthused everyone with the START initiative which teaches awareness of randomised trials in primary schools. ‘We must’, as a nineteenth-century politician said, ‘educate our masters’, and democratic, scientific, education can’t start too early.

The need to educate and listen to patients, and to educate clinicians and researchers to do it, was a frequent theme. For example, ‘Exploring patient treatment preference enhances trial recruitment, so why do trial recruiters often avoid doing it?’ asked Bridget Young from the University of Liverpool (PS5A-02). Is it possible to improve clinical education so that patient consent is real and not just based on the clinician’s prejudices? There is a need to listen to the experts by experience, even if there is sometimes a good reason for mitigating their advice.

Some sessions really dug down effectively into the business of improving trial performance through tools for learning what is actually happening, and the NIHR workstream to improve trial delivery for underserved groups - ‘Better healthcare through more inclusive research’ – sounded right on the money and included the need for wide accountability and inclusive PPI (though the presenter rather spoiled it by a throw-away comment about the need for less white, male, ageing, educated, middle class involvement. Guilty.) However, the effect of many presentations was to emphasise just what is not known, especially about patient and public behaviour. I found much of value in the session on trial performance (7A) where for example Kate Walker (University of Nottingham) had identified six key metrics (including retention) in a systematic review of multicentre randomised trials and Caroline Wilson from Bristol Medical School presented a framework to improve the process of recruitment to RCTs. I was encouraged even more by the Aberdeen colleagues who have created key tools for trialists to employ. Shaun Treweek’s Cochrane review into trial recruitment decisions (PS9B-01) coupled with the development of Trialforge (PS10A-01) could have a real impact on researchers approach to recruitment.

So we know there are inefficiencies in trials, we can measure them and even, sometimes, fix them, but the behavioural science that underpins all this is much less explored. To that end I really liked the presentation by Peter Knapp from the Hull York Medical School who used systematic reviews to ask why patients take part in research. Top three answers: personal benefit, altruism and trust in the clinician. Now what about a similar review of retention, acknowledging that motivation changes over time and in the light of experience?

Beyond this very partial view of the sample of work to which I listened, and where I focussed on patient and public engagement, there was great richness often in just hearing complex ideas eloquently expressed by humane experts, nowhere more so than in the other two keynote addresses by Prof. David Beard (Oxford) and Prof. Marion Campbell (Aberdeen).

This world of clinical trial methodology, with its arcane language more mathematics than poetry, didn’t in the end seem overpoweringly threatening. After all, methodologists are public and patients too. There is a way to go in convincing them that they have to shout louder and be public facing, especially in the present post-truth environment, though the route described by Marion Campbell seemed to me to suggest the basis for a very fruitful way forward.

I was grateful to be allowed and encouraged into the spaceship for this short time. I am happy to report that, for this lay participant observer at least, there were only occasional hints of foreboding during the conference, and that these probably arose as much from my ignorance as from anyone else’s intention or carelessness.

My goodness, there are some wise and clever chimps around!