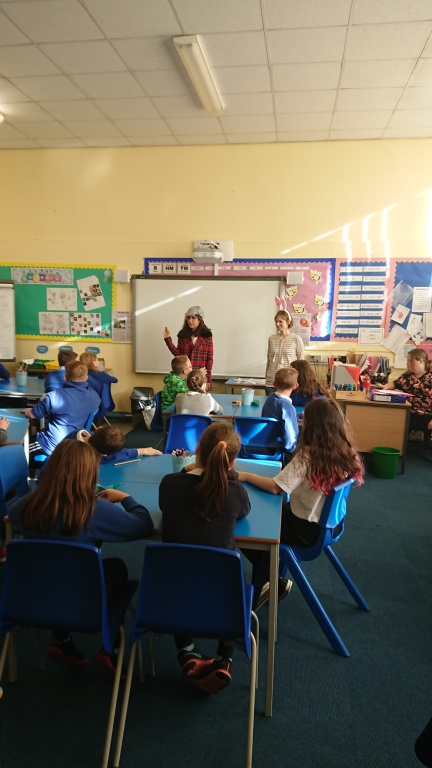 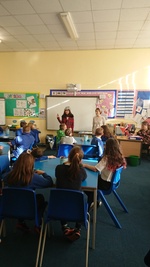 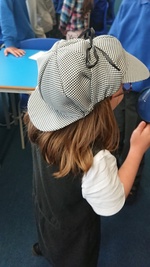 On the 12th of September, three researchers from the Unit went to Kittybrewster Primary school in Aberdeen to challenge pupils with a Treasure Hunt activity. The activity was part of the first Maths Week Scotland.

The Treasure Hunt involved solving a health mystery by following several clues and answering questions about them. The clues are designed to map to the stages of a systematic review process, such as defining a question, finding relevant data, assessing its quality and combining it to find an answer. The activity involves simple mathematical operations and it has the goal of helping pupils to develop their critical and logical thinking.

At the end of the activity, and after answering the different clues correctly, the students are rewarded by the ultimate gift: becoming mini-detectives (and specifically mini-Sherlocks!) themselves.

Beatriz Goulão co-led the activity with Clare Robertson and Magaly Aceves. Kirsty Smith, Primary Teacher at the Kittybrewster School and the school’s organiser for Maths Week Scotland, said: “Beatriz, Clare and Magaly delivered a fun and motivating workshop to our Primary 6 children during our Maths Week in Kittybrewster Primary. The workshop allowed our children to explore the importance of good quality evidence through an engaging context. The children were able to see how maths is used as an integral daily skill within the career of a systematic analyst but in an accessible and practical learning experience suitable for our Primary 6 children. All children thoroughly enjoyed the workshop and we would love to welcome Beatriz and her team back into Kittybrewster in the near future. Thank you for taking part in our Maths Week and helping to make it such a success!”.

The activity has been presented before at TechFest with great success and positive feedback from children, parents and teachers alike. The activity has been supported by the STEM network in Aberdeen and the Ask for Evidence campaign, part of the Sense about Science charity. It was funded by the University’s Public Engagement with Research Unit’s.