From 9/11 to the border wall: premiere for new documentary from University filmmaker
06 October 2017 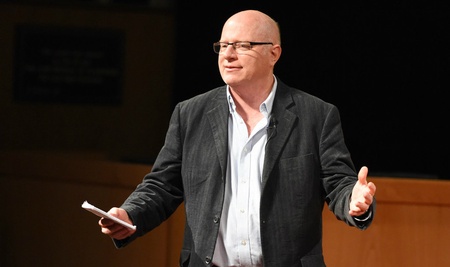 A documentary film exploring the issues behind America's planned border wall with Mexico and featuring an interview with a key figure behind the response to 9/11 will be premiered at the University of Aberdeen next week.

‘The New Colossus’ is the latest research film by Professor Alan Marcus, Chair in Film & Visual Culture at the University.

It features an extended interview with Robert Bonner, who was appointed as Commissioner of US Borders and Customs on the day before 9/11, and suddenly had the responsibility of closing and managing the nation’s borders the next day.

The documentary explores the legacy of 9/11 and its relationship to America’s border policy, with a detailed look at the current controversy over the US/Mexico border wall.

Tuesday’s screening – which is open to all - will be followed by a panel discussion about the film that will focus on themes of national trauma, patriotism, anti-immigration sentiments as well as idealism.

The discussion will be chaired by Professor Thomas Weber, and will feature Professor Marcus and experts from the University of Aberdeen’s Centre for Global Security and Governance.

Alan Marcus' perceptive film prompts us to consider what role borders will play in the 21st century at a time that our globalised world is under attack everywhere." Professor Thomas Weber

Commenting on the film, Professor Marcus said: “In making the film I was delighted to discover some terrific material in the Richard Nixon Presidential archives, and to secure an interview with Robert Bonner on Washington’s post-9/11 response, both of which have a bearing on the current debate about whether to build a fortified wall on the US/Mexican border.”

Professor Weber added: “Alan Marcus’ perceptive film prompts us to consider what role borders will play in the 21st century at a time that our globalised world is under attack everywhere.

“Next week’s screening will provide the audience with an important insight into themes of national trauma, patriotism, and anti-immigration sentiment in America, and I’m looking forward to chairing the subsequent panel discussion.”

*The first screening of ‘The New Colossus’ will take place at the Regent Lecture Theatre, King’s College, on Tuesday, 10 October, from 5pm – 6.30pm.

The Centre for Global Security and Governance brings together academic experts, policy makers, and students from across the University of Aberdeen, the United Kingdom, and the globe to define, analyse, and propose remedies to the most pressing security challenges the world faces in the 21st century.  For further information, please contact global-security@abdn.ac.uk