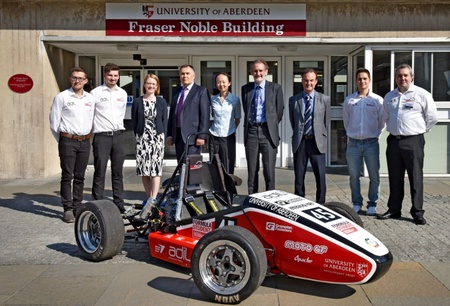 Scotland's Minister for Higher Education visited the University of Aberdeen this week, where she met with the Principal and was given a tour of the School of Engineering.

Shirley-Anne Somerville also met with the University’s TAU Racing Formula Student team following their recent success at Silverstone, where they finished first in Scotland in the student motorsport event.

Commenting on the Minister’s visit, Professor Sir Ian Diamond said: “I was delighted to welcome Shirley-Anne Somerville to the University, and accompany her for a tour of the Fraser Noble building where she was interested to hear about the work of our Carbon Capture and Storage research group.

“The visit also gave us the opportunity to discuss matters relating to the EU, where I underlined the importance of clarity over the future funding status of EU students who are considering Aberdeen as a potential study destination.”

Picture caption: Shirley-Anne Somerville (third from left) met with the University’s TAU Racing team during her visit.  To her right is Professor Igor Guz, Head of the School of Engineering, Sir Ian Diamond, Dr Yukie Tanino and John Scrimgeour, Executive Director of the University’s Aberdeen Institute of Energy.