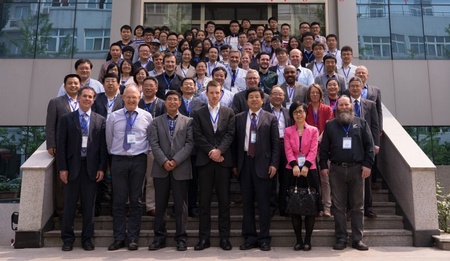 Staff from the University of Aberdeen visited Beijing in April to kick-off discussions for a new Virtual Joint Centre to investigate and tackle the problem of Nitrogen use in Chinese agriculture.

Under the leadership of Professors Pete Smith (University of Aberdeen), Hongbin Liu (Institute of Agricultural Resources and Regional Planning, Beijing) and Jiaotang Ju (China Agricultural University, Beijing), the project brings together the expertise of academics from nine leading Chinese institutions alongside UK partners from the Universities of Aberdeen, Cambridge and East Anglia, Scotland’s Rural College (SRUC), and ADAS.

The kick-off meeting was an opportunity to start engaging with senior officials from the Chinese Ministry of Agriculture, the Chinese Academy of Agricultural Sciences, and colleagues from the British Embassy in Beijing. It allowed for UK-based and China-based partners to meet and discuss the overall scope of the project, and to make detailed plans for the joint work to take place over the coming 3 years. The project is split into eight work packages with each covering a different aspect of agricultural Nitrogen use. In addition to work package meetings, two field sites in Beijing, where agricultural experiments are to be carried out, were visited.

Among the outcomes of the meeting was a plan for close collaboration between UK and Chinese-based PhD students and postdoctoral researchers, providing opportunities for University of Aberdeen researchers to work in China and vice-versa.

The project is funded by around £3 million from the Newton Fund via BBSRC and NERC and around £4 million from sources in China.