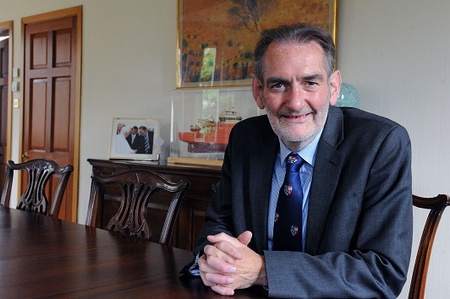 Sir Ian Diamond has welcomed yesterday's announcements from the UK and Scottish Governments of over £500 million in funding for Aberdeen and the north-east through the City Deal.

Commenting on the investment, which will include a substantial boost for innovation in which the University of Aberdeen has played a key role, he said:

“The City Region Deal is wonderful news for the north-east, and for the University of Aberdeen.  We have been working closely with our partners at Aberdeen City and Aberdeenshire Councils on the proposals, and a key pillar of our joint ambition is the development of a high-value innovation agenda for the region, spanning both universities and industry.

“This is focused on a multi-disciplinary innovation undertaking near-market, industry-led research, and colleagues from the University have played key roles in advising on important themes such as oil and gas, renewable energy, food and drink, life sciences, and big data.  Our input reflects our world-renowned research strengths and contribution to the innovation landscape within the city and beyond.

“The successful City Deal bid is testament to the efforts of all those who have being working hard to help secure the area’s long-term economic future, and I am immensely proud of the role that the University has played in bringing this much-needed boost to the region.

“Through our involvement with the Opportunity North East (ONE) economic development organisation we have already helped to secure significant funds for innovation in the north-east, and we will continue to work closely with our public and private sector partners as part of this ongoing effort.

“In the meantime, I am hugely excited by the prospect of the University playing a key role in the implementation of the City Deal plans, and look forward to working with staff to maximise the benefits to the University and the region as a whole.”