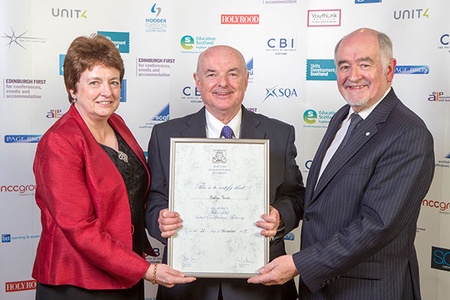 SQA's highest accolade, the SQA Fellowship, has been presented to Martyn Rouse, Professor Emeritus at the University of Aberdeen's School of Education.

Until his retirement in 2011, Martyn Rouse was Chair of Social and Educational Inclusion at the University of Aberdeen and Director of the Inclusive Practice Project.  Previously, he was a senior lecturer in the Faculty of Education, University of Cambridge. During a 25-year career in higher education Martyn has undertaken research and development work on inclusion for local authorities and national agencies in the UK. He has chaired several national committees including the HMIE review of provision for dyslexia in Scotland and the SQA Equality and Inclusion Key Partners Group. He was a founder member of the STEC Inclusion Group, which was instrumental in the production of the National Framework for Inclusion.

His international involvement includes work with the European Commission, UNICEF, UNESCO, the OECD and the Soros Open Society Foundation. His co-authored book Achievement and Inclusion in Schools was winner of the NASEN/Times Education Supplement Academic Book of the Year 2008. With Kate Lapham, he is co-editor of Learning to See Invisible Children: Inclusion of Children with Disabilities in Central Asia (2013), which was recently translated into Russian.