Button Boxes and Moothies: celebrating the free reed tradition in the North-east
22 October 2015 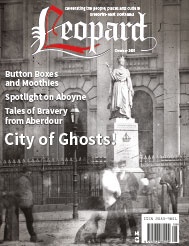 It's an exciting time at the University of Aberdeen's Elphinstone Institute. During 6-8 November this year, the fourth Button Boxes and Moothies festival will be hosted by the Institute, attracting musicians and enthusiasts from many parts of the UK, Ireland, and further afield.

The unique event - featured in this month's Leopard magazine - brings together instrumentalists who play mouth organs, concertinas, melodeons, Jew’s harps (trumps), and diatonic button accordions. It will be the perfect place, on an otherwise cold winter weekend, to whet the appetite and open the ears to the music of some of the very best talents from Ireland, England and Scotland.

While many people may associate the North-east of Scotland with fiddle music and ballad singing, there has been much less awareness of the region’s heritage of free reed instruments, and the number of players today is relatively few. But you don’t have to go back far in history to see that button boxes, concertinas, moothies and Jew’s harps have played a vital role in shaping the musical traditions of this area, both in the farming communities and among the seafaring population. For example, bothy crews of the late 19th and early 20th centuries often included melodeon players, and David Kerr Cameron, in his book The Cornkister Days, wrote of a time when “every child of the touns grew up with a melodeon and a mouth-organ and maybe a jew’s harp in the house”. In the accompanying photos, both of which date from around 1900, melodeons are shown taking centre stage among bothy crews in Balcairn and Bethelnie. And melodeons weren’t just tinkered with for fun. Cameron also notes that “Some [farm workers] made songs or melodies that would pass down for those who sought to know and understand their ways. Some managed to take their accordions and melodeons out of the bothy and on to the dance-hall dais.