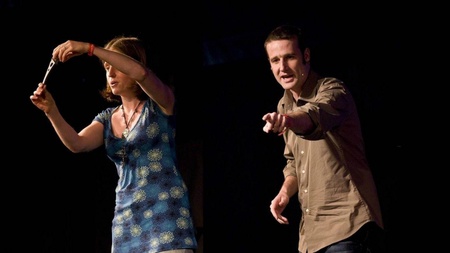 FameLab is inviting scientists, mathematicians and engineers across the UK to take part in its flagship science communications competition.

Contestants have just three minutes to convey a scientific concept of their choice.

They will be judged by leading researchers, media personalities and science policy makers on the content, clarity and charisma of their presentation.

The UK winner receives £1000 cash prize and £750 to spend on a science communication activity and goes on to compete against over 25 other contestants from around the world at The Times Cheltenham Science Festival in June 2015.

Initiated by The Times Cheltenham Science Festival, FameLab aims to discover charismatic, up-and-coming scientists who can inspire people to see the world from a new perspective.

Open to researchers and professionals both in academia and industry, FameLab also offers ‘money can’t buy’ prizes, such as the FameLab Masterclass, where communication experts provide superb public engagement training.

FameLab alumni have gone on to have successful media careers, for example British space scientist Maggie Aderin-Pocock, who has recently been awarded an MBE for her services to science, and evolutionary biologist Simon Watt who has gone on to present Channel 4’s Inside Nature’s Giants.

Regional training and heats will be taking place in Aberdeen on December 3 at Satrosphere. Training will cover: getting your message across, storytelling, how to avoid using jargon and interacting with your audience.

The grand UK final will take place on April 22, 2015 at the Bloomsbury Theatre, London.

In my view, it has never been more important to invest in science and, critically, communicate scientific progress to the broader non-scientific community." Professor Russell Foster FRS

British neuroscientist and Chair of The Times Cheltenham Science Festival Professor Russell Foster FRS said: “FameLab introduces us to the next generation of scientists who are not only addressing great scientific challenges, but are able to communicate what they do. In my view, it has never been more important to invest in science and, critically, communicate scientific progress to the broader non-scientific community.”

Jane Furze, Director of The Times Cheltenham Science Festival, said: “FameLab is one of the most exciting aspects of the Science Festival. Watching the world’s brightest and most entertaining young scientists compete to explain a tough scientific concept that they’re truly passionate about is great fun. It’s also a fantastic opportunity for us to discover the most engaging Festival speakers of the future.”

Since 2013 the UK competition has been supported by EDF Energy and we are delighted that this year we are joined by the Royal Society of Chemistry and Haseltine Lake LLP as partners.

Dom McDonald, Outreach programme manager at the Royal Society of Chemistry said: “We’re excited to be working with The Times Cheltenham Science Festival to support FameLab UK. FameLab is a great opportunity for the best and most enthusiastic scientists to talk about their subject in a captivating way and we’re particularly keen to encourage ambitious chemical scientists to apply to take part and share the excitement and value of chemistry with audiences all over the UK.”

Lesley Evans, Chief Executive of Haseltine Lake says: “We are delighted to be part of FameLab UK 2015. At Haseltine Lake, we are incredibly passionate about supporting young science talent. Inspiring the next generation of scientists and engineers to explain complex in a subjects clear and concise way is essential for continued progress. This is what FameLab does so effectively, in a fun and engaging way – and for free! We wish all the entrants the very best of luck!”

For more information about the competition, participating locations and to register for the 2014-2015 UK competition: http://famelab.org/uk/famelab-uk-2015