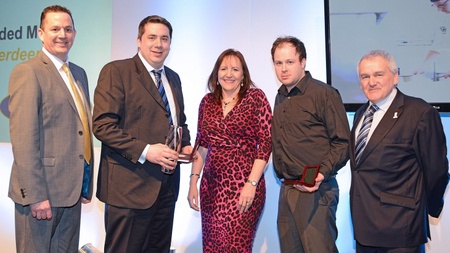 Two chefs from the University recently whipped up a culinary treat for the judges of a prestigious catering competition, and were placed best university catering team in Scotland.

The Chefs Team Challenge is organised and hosted by TUCO, the leading professional membership body for ‘in house’ caterers operating in the higher and further education sector.

Representing Aberdeen, Mark Donovan and Sean Hughes travelled to Blackpool and Fylde College for the competition, before coming out as top Scottish team and placed fourth in the UK at an awards ceremony hosted by the Blackpool Hilton.

The event saw all teams presented with a larder of ingredients and then two hours to plan a menu, to be cooked and judged the following day.

Mark and Sean’s menu was highly commended and the two chefs were praised for the dishes they served up, under pressure and in just two hours.

Calum MacLachlan, Head of Commercial Services, said: “Mark and Sean have brought a quality and new dimension to our team and have been instrumental in creating and producing more imaginative dishes using more fresh produce.   For example, the introduction of Roots into the food court in the hub, an outlet offering exclusively vegetarian and vegan meals every day.  The improved menu offered from the Traditional outlet has also been welcomed and received a great deal of positive feedback. We have also seen the reintroduction of a quality lunch time hot meal offer at Café Zeste and the appearance of the Street Food truck around Campus.

“I am thrilled that their creativity and hard work has been recognised at the TUCO awards – it is extremely well deserved.”

University staff will be able to try Mark and Sean’s award winning menu at the Bishop’s Table from Wednesday 23 April to Friday 25 April.