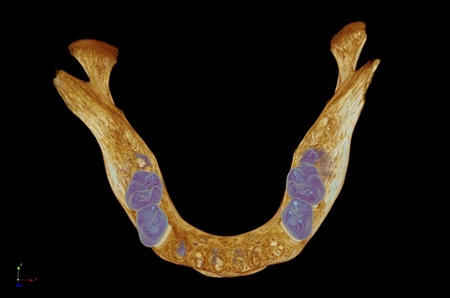 What could a kidney stone, a human jawbone and a head louse egg on a human hair possibly have in common?

Incredible images of all three – showing extraordinary detail invisible to the naked eye – have scooped three awards for a University of Aberdeen technologist.

It is the third time Kevin Mackenzie has won an award in the Wellcome Image Awards.

Kevin, who manages the Microscopy and Histology Core Facility at the University of Aberdeen's Institute of Medical Sciences and who attended a special awards ceremony in London last night (March 11), said: "I'm absolutely delighted that my images have been recognised by judges in the Wellcome Image Awards. This is the third year that my images have been selected and it was great to be at the award ceremony last night."

A total of 18 winning images were chosen by seven judges from all those acquired by the Wellcome Images picture library since the 2012 Awards. An overall image winner was announced at last night's awards ceremony.

BBC Medical Correspondent Fergus Walsh, who was a member of the judging panel and also presenting this year's awards, said: "As always, this year's entries are both technically brilliant, and visually striking. Never before have I thought of a kidney stone or a nit as beautiful, but the Wellcome Image Awards show time and again that there can always be a different way of looking at things."

Kevin's images are of:

Kevin has worked in the microscopy field for more than 34 years, starting out as a lab technician in the University's Department of Anatomy, where he developed a keen interest in all microscopic techniques.

He has also worked in other departments within the University, including Plant Science and Zoology, and acquired a breadth of knowledge across the disciplines.

Added Kevin: "I first became interested in photography while working in anatomy - this was in the pre-digital days, when processing and developing was done in the darkroom. Ever since, I have been on the lookout for unusual specimens to capture under both the light and electron microscope. With the advent of digital imaging, it has become much easier to enhance the final image."

The winning images will be displayed across the UK at four major science centres as well as in a window display at the Wellcome Trust's headquarters in London.

Glasgow Science Centre, the Museum of Science and Industry (MOSI) in Manchester, Techniquest in Cardiff and W5 in Belfast will all host simultaneous exhibitions, and there will be a display at the Ruskin Gallery at Anglia Ruskin University in Cambridge during the Cambridge Science Festival, bringing these images up-close for a nationwide audience.

The images will also be made available on the Wellcome Image Awards website and already feature in Wellcome Images collections, where they can be accessed and used along with more than 40,000 other contemporary biomedical and clinical images.

Catherine Draycott, Head of Wellcome Images and a member of the judging panel said: "Every year, the Wellcome Image Awards bring to life the vibrancy of the world of science, as well as championing the incredible cutting-edge techniques in scientific imaging. This year, we are particularly delighted to be exhibiting the winners across the UK allowing many more people to come closer to these exceptional images."