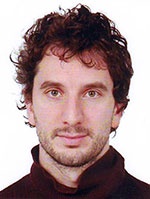 A University of Aberdeen neuroscientist who is investigating how the brain makes sense of what our eyes see has been recognised for his work.

The Applied Vision Association has awarded Dr Peter Neri its David Marr Medal - given to an outstanding vision scientist in the early part of their career.

Named after one of Britain’s most distinguished vision scientists, the medal was given to Dr Neri for his innovative work which brings together experiments, theory and computing to try to understand how vision works.

The visual system is the system in our body that enables us to make sense of the visual world around us.

Dr Neri, a Royal Society University Research Fellow, explained: “If you close your eyes and open them again, in no time the world is back in all its vivid appearance. It is not just that you see things; your brain also tells you what these things are, where they are and whether they do. All this information is interpreted by your brain in a fraction of a second. It is a mystery how our visual system pulls this off, and it is this mystery that people working in vision science want to solve.

“David Marr was a renowned computer scientist who took a different tack in order to try to understand our visual system and his approach prompted scientists to think more carefully about the problem that the visual system faces in the first place.

“One of his most important messages was that it was no longer sufficient to be a biologist, or a computer scientist, or an engineer, or a mathematician - all of these skills were necessary to answer a deceivingly simple question such as "how does vision work".

“I’m absolutely delighted and honoured to receive this medal in his memory.”