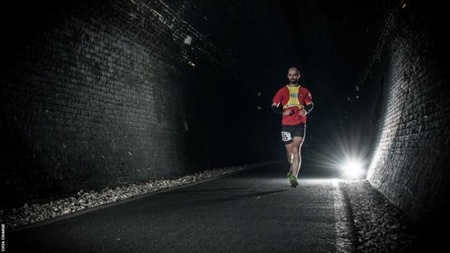 This week the University’s Mike Raffan featured in a BBC Sport article about one of the UK’s most extreme running events.

He shares how clocking up the miles is improving his work-life balance and helped him to recover from major heart surgery.

My role is Team Lead within the DDIS Server Team which I have done that for seven years, although I’ve been with the University since 2001 and am also a graduate so very at home here!

It was through work that I first took up running when members of the IT Team decided to take on the Inverness 10k. I soon discovered the benefits and, after sitting at a computer desk all day, running lets me escape.

I quickly progressed to marathons and then wanted an even greater challenge so moved onto ultra running, which is a real test of both your mental and physical endurance but brings many rewards.

For me, putting my body to the test and keeping fit have been particularly important as I was born with an artery in the wrong place. This was not something I was aware of until shortly before the first lockdown when I began to experience shortness of breath running up hills and I underwent open heart surgery to correct an anomalous right coronary artery in February 2020.

I was back running just 10 days later and completed a backyard 106-mile ultra-marathon seven weeks after the surgery. Having something to focus on really helped my recovery especially in such uncertain times.

Ultra running is said to attract IT people and project managers. I think that's because a lot of people within IT are introverts and so don’t want or need the social interaction to thrive. Being out on my feet lets me switch off and get away from it all.

The Tunnel race was particularly gruelling and it was interesting to be interviewed about the experience for the BBC. The darkness is quite disorientating and you are not permitted music or other distractions.

Since I completed the tunnel race I’ve represented Scotland at four Backyard Ultras (last one standing) where you run one lap 4.167miles on the hour then be ready to run another lap the next hour. The race keeps going until there is nobody left running.

While I enjoy taking my running to the extremes at these events, the rest of the time it is just part of my daily routine. Like all fitness, the key is consistency and I run around 50 miles a week, upping this to around 70-90 miles when preparing for an event.

Flexible working arrangements have really benefitted me as it allows me more opportunities to train and has improved my work-life balance.

Running is a great way to destress and if you’ve ever fancied giving a go then you might be surprised to discover what you can achieve….and it doesn’t need to be over ultra distances (or through tunnels) to make you feel better!