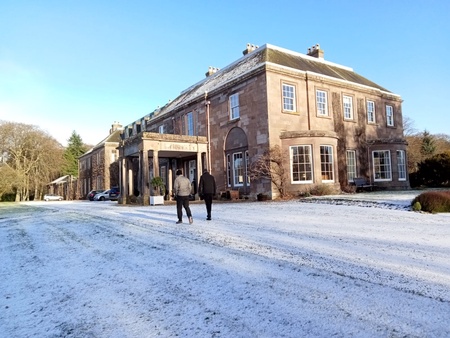 After the long months of lockdown the students were so excited! 27 of them – postgraduates in History, English, and Art History – were finally heading for a training weekend to The Burn, the eighteenth-century manor house near Edzell. Many student groups from the University of Aberdeen students had spent entertaining weekends in academic retreat there before. And what a retreat it was to become! Three History staff, and our guest speaker, Professor Sanjay Sharma, currently a Leverhulme guest professor at Dundee, with his wife and son, made it to the Burn, as did two distance learning postgraduates form the online Scottish Heritage MLitt. David Hopkins arrived from Manchester, and Dana Scott from Edinburgh. As trees blocked the drive, and with the roads to Edzell and Fettercairn blocked, cars and taxis had to be abandoned. They made it to the front door soaked to the skin.

25 others never made it. The students waited for the 16:45 from Aberdeen to leave the station, but it never did. Fallen trees and winds of 90 miles per hour shut down the line. Meanwhile at the Burn, electricity failed before dinner while we were still desperately communicating with Aberdeen students who had been looking forward so much to this retreat – Saturday night quiz all prepared! Some still enthusiastically tried to get here against all obstacles, but the conditions stopped them in their tracks! Ioannes Chountis, a distance PhD student in History, had flown in just for the weekend: his plane was rerouted to Glasgow, from where he returned home on Sunday.

As the wind battered the Burn’s old walls on Friday night, the internet went down and phone batteries ran low. For a phone signal, we had to sit in the bay window or walk out into the stormy night. The Burn’s staff were amazing. There was still heat in the Aga, and they rustled up a lovely curry dinner, which we enjoyed eating by candlelight. Defeated by the elements, we retired to the large drawing-room to enjoy the local whisky in front of a roaring fire, shadows dancing on the high ornate ceilings. We would not have been surprised if a mysterious inspector out of Agatha Christie had arrived through the snow to tell us of some criminal on the run. He never did, however, and we made our way to bed by candlelight as the old house creaked and groaned in the wind.

Early next morning the sun came up over a snow-covered landscape of great beauty. Dr Mehrkens and Professors Frost and Friedrich moved the branches that had blocked the driveway, so that two abandoned cars could be moved up to the house to avoid the danger of falling branches. Meanwhile, our Indian guests were instructed in the laws of croquet, though the snow made playing a little tricky.

Fortunately, everybody had reached home and stayed safe that dark and stormy night. Without electricity and without most student participants, the programme had to be abandoned. The AGA in the kitchen was cooling down, and it was only with a struggle that breakfast and lunch could be produced.  After a lovely walk along the river Esk, cut short by a massive tree across the path, we left for home, although a magical mystery tour of the local countryside was necessary to find a route out to the A 90 that was not blocked by fallen trees. The Burn Estate has lost at least 100 trees, including a small forest of fir trees that were mowed down like ninepins. We shall not be defeated, however, and plan to reschedule for the spring!