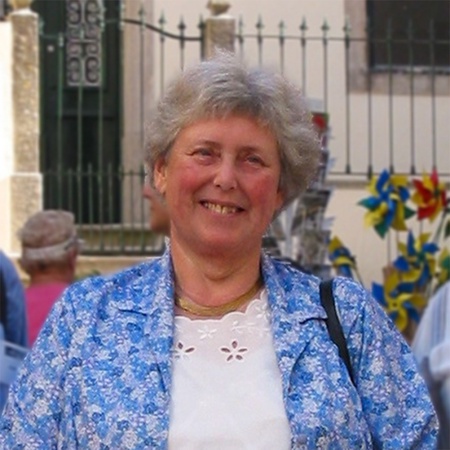 It is with great sadness that we announce the death of our former and much respected colleague, Dr Margaret (Meg) Hutchison, who passed away in Aberdeen Royal Infirmary on Tuesday, November 2.

Meg (known professionally as Margaret Foster) was appointed by Professor John Mallard in 1968 to work on Electron Spin Resonance (a precursor of MRI), joining the group where Jim Hutchison already worked. A relationship flourished and Meg and Jim married in 1972. When the team imaged the first patient using MRI in 1980, Meg’s background as a zoologist proved invaluable in correlating the image appearance with disease-induced changes in the tissues. This pioneering work continued throughout Meg’s career, contributing greatly to the Aberdeen team’s research and confirming Meg’s world-wide reputation in the field. Meg helped to set up the European Society for Magnetic Resonance in Medicine and Biology in 1983 and was its President in 1991-92.

Meg was promoted to Lecturer, Senior Lecturer and then Reader in Bio-Medical Physics. She coordinated the department’s Master’s degree programmes in Medical Physics and related topics from the mid-1980s until her early retirement in 2001. Generations of MSc students and many PhD students and post-docs benefited from her expert, always kind guidance.

Meg and Jim Hutchison were known for their incredible kindness and generosity, and their “NMR Christmas lunches” – organised and paid for by Meg, in a local hotel – were one of the highlights of the year for all the staff and students working in and associated with the MRI group. Their hospitality also came to the fore, whenever visiting researchers would visit the labs.

Professor David Lurie, Emeritus Professor at the University of Aberdeen, worked closely with Meg for many years. He said: “Meg’s knowledge of biology and her background in ESR made her a fantastic research partner when we were developing free radical imaging techniques and her input was invaluable in taking that work forward.”

He also recalls fondly work-related trips with Meg to a variety of locations, including trips to Moscow and Novosibirsk as part of a large networking grant that Meg had secured. “Meg’s wonderful sense of humour made her an excellent travelling companion,” he added.

Following her retirement, Meg changed her focus from biology to archaeology, which was always a keen interest of hers, and volunteered at the University’s museum in Marischal College for many years, developing her expertise in osteology and isotopic dating of Neolithic bone fragments. She continued to publish in that field until 2017. She would also assist the curator of the archaeological museum in Gozo, Malta, where she and Jim had a holiday home.

Professor Peter Murchie knew Meg well having been neighbours for almost 50 years. Meg even taught Peter to drive in her Ford Capri.

He said: “Aside from her work in medical physics, Meg was a true polymath who could talk authoritatively on a very wide-range of topics from literature to astronomy to car mechanics to name but a few. She had a passion for antiquarian books, a large collection of which I believe she has bequeathed to the University.

“She had an especial passion for archaeology and I recall had published monographs and articles on archaeological topics relevant to the Picts and Northeast Scotland. Relevant to this she was involved in the Beaker’s and Bodies project.

“She was a gourmet cook and keen equestrian, keeping a horse at Countesswells, and a Rotarian. She was also a natural tutor and there are at least two generations of Westhill school children who have grown up experts in pyrotechnics due to her generous and fabulous annual bonfire night firework displays over 40 years in Westhill!”

Emeritus Professor Peter Sharp, who joined the team in 1969, the year after Meg, added: “Meg was a lone biologist in a department of physicists but there was no one who would deny that she played an immensely important part in the department’s success.

“As medical physicists we were tasked with developing physics techniques which could then be applied in the medical arena. Often our ideas would work well on the benchtop but struggled to perform when applied to patients. This was when Meg would step in and gently explain to bemused physicists how to address the challenges of biology. It is no exaggeration to say that without these insights many of the developments championed by the department would have failed and patient care would have suffered.

“For many years Meg was also the only woman on the academic staff and, as the coordinator of our MSC programmes, often found herself providing emotional support to students. I was tempted to say that she acted as a mother to students but even now I can hear Meg’s outraged reaction to such a sexist comment! It has been a privilege to know and work with Meg.”

Meg will be fondly remembered as a first-class researcher and teacher, a consummate organiser and a kind and generous colleague who will be greatly missed by all who knew her.

The funeral will be held on Friday, 12 November at 3.15pm at the Aberdeen Crematorium.