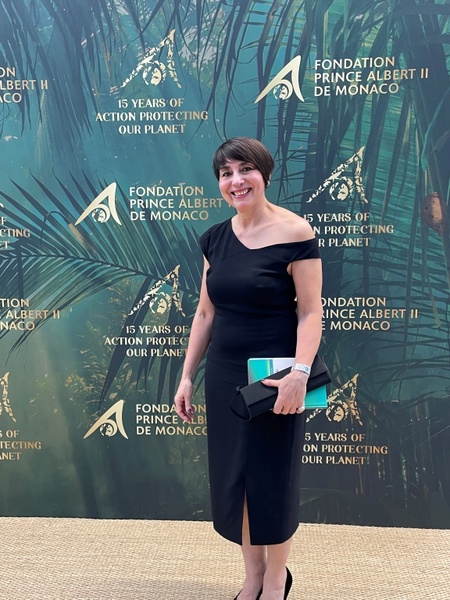 A University of Aberdeen academic was among guests from around the world at an awards ceremony celebrating the exceptional men and women who are committed to protecting the environment.

Now in their 15th year, the Prince Albert II of Monaco Foundation’s Awards pay tribute to leading individuals and organisations for their deep commitment to preserving the planet in each of the Foundation’s three priority areas: limiting the effects of climate change, preserving biodiversity, and managing water resources. Previous winners include Dr Jane Goodall and Sir David Attenborough for their work in biodiversity, while Sting and Orlando Bloom are among previous Special Awards winners.

This year’s event on 29 October at Grimaldi Forum, Monaco, was attended by Dr Gisele Arruda, Professor of Circumpolar Studies at the Business School.

The ceremony included a performance of ‘The Way of the Rain - Hope for Earth’, a multi-media experience created and directed by Sibylle Szaggars Redford in collaboration with composer Tim Jannis, performance artist Floyd Thomas McBee, and with a special narration by Robert Redford. Created for symphony, choir, film, art and the spoken word, the piece tells the story of the formation of the universe, the evolution of all galaxies and eventually the birth of Earth with all its elements.

The awards ceremony, which featured an audience dressed in white, also paid tribute to leading individuals and organisations for their deep commitment to preserving the planet, with some specific categories awarded, including Water which went to Canadian activist Autum Peltier; Biodiversity, which was awarded to IPBES; Climate Change, which went to GreenWave; and Young Researchers, which saw a Scholarship granted for IPCC global researchers from developing countries.

“It was a night of beauty, awareness and hope for the earth,” said Professor Arruda.