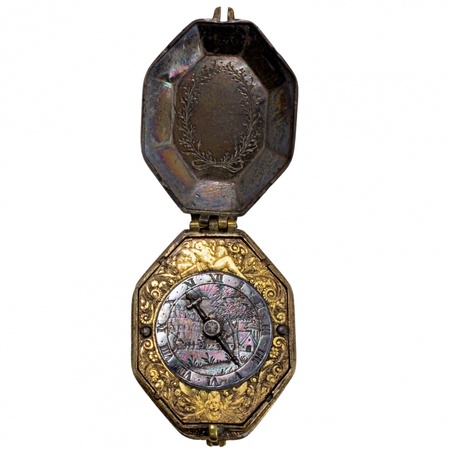 This watch belonged to John Knox (c. 1514 - 24 November 1572) leader of the Scottish Reformation and the founder of the Presbyterian Church of Scotland.

The watch is silver and in the shape of an oblong octagon known as a Nurnberg egg. A pastoral scene is represented on the dial-plate which has a single pointer and the outer case is decorated with stylised tree branches. It was made by the French watchmaker Nicolas Forfaict (c1580–1615) of Paris.

It has been claimed that the watch was presented to Knox by Mary Queen of Scots, although a note from the British Museum in the catalogue files suggests that it is unlikely that a watch made by Forfaict could be old enough to have been given by Queen Mary.

The watch (ABDUA: 15869) was preserved in the family of the late Mr Thomson of Banchory who was descended from one of Knox's daughters.

Museums and Collections at UoA (@uoacollections) • Instagram photos and videos